The global gaming phenomenon Fortnite has a huge global user base – last reported in March at 250 million gamers – and the just-concluded Fortnite World Cup with its $30 million prize pool and an online viewing audience of over two million has certainly only added to its allure. Over 40 million Fortnite gamers competed in qualifying rounds to get one of the 100 coveted spots in the World Cup and a guaranteed $50,000 payout, plus a shot at the $3 million top prize (won by a 16-year old!). Given the size of the global player pool and the evident motivation to up one’s game, it comes as no surprise that cybercriminals are now targeting Fortnite users by leveraging their competitive zeal.

A new ransomware auto-denominated “Syrk,” built with tools available on the internet, has been found to be masquerading as a game hack tool for Fortnite, basically a cheat which promises to give players an edge in aiming accurately (an aimbot) and knowing the locations of other players (ESP, in the gamer parlance). We expect it to possibly be distributed via an upload to a sharing site and the link posted in Fortnite users in forums.

We’ve taken a deep dive into the sample reported by Leo to understand how it works, with the step-by-step analysis laid out below, and perhaps most interestingly can report (spoiler alert!) that this Syrk ransomware is in fact Hidden-Cry with a .Syrk extension. The source code for Hidden-Cry is readily available, having been shared on Github at the end of last year.

One principle feature of the Hidden-Cry ransomware is that, as seen in the instructions shown, is the sense of urgency it creates in the victim by deleting files every two hours. However, we believe it is possible for victims to recover deleted files, given the simple method used to delete the files. We also provide instructions at the end to victims on two methods for decrypting files without paying to receive a password.

Once the file is executed, it will go through the following 10 steps:

3. Disables Windows Defender and UAC through a registry tweak

5. The ransomware executes cgo46ea565sdfse7.exe. Since it is a Hidden-Cry-based ransomware, it drops the following batch files:

8. It monitors for the following tools to prevent it from terminating its process:

9. The next step is it will set a timed procedure to try and delete the encrypted files in the directories listed below, deleting the files every two hours in the following order:

10. Now it will use LimeUSB_Csharp.exe to infect USB drives if they exist. Like Hidden-Cry, LimeUSB’s source code is shared in a code sharing website. It will check for USB drives in the infected machine and will replace the original file with a SCR file.

Clicking the showID part of the ransom window will bring you to another window that will show the ID and ask for the password to decrypt the files. 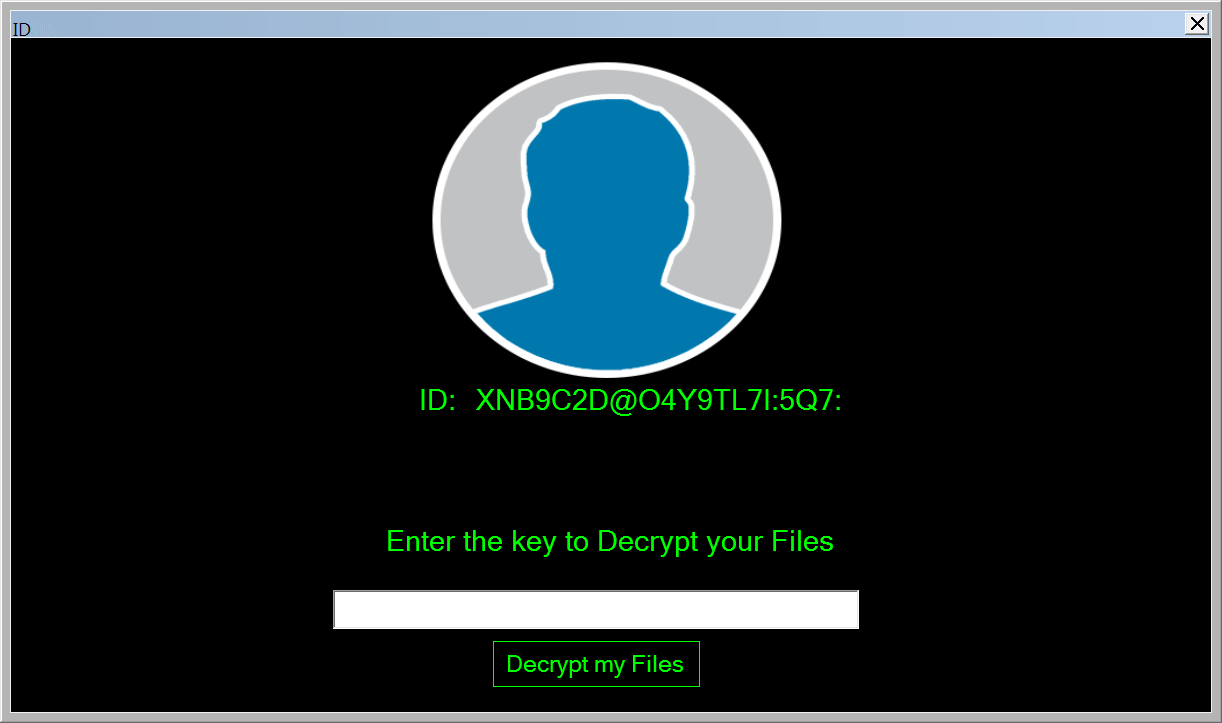 Other Methods for Decrypting Files

Fortunately, the files to decrypt the encrypted files can be found in the infected machine. The file dh35s3h8d69s3b1k.exe is the Hidden-Cry decrypting tool, and can be found as one of the resources embedded in the main malware. Since the key used is already known, it can be used to create a PowerShell script based on the shared source of the Hidden-Cry decrypter. To do this, extract the embedded file dh35s3h8d69s3b1k.exe and execute the file in the infected machine. It will drop the necessary PowerShell script needed to decrypt the files.

As a second approach, the main malware also drops the file where you can find the password. It drops the following files:

It also has a file to delete the files it dropped. If a password was used to decrypt the files, Delete.exe will be dropped and executed, which will delete the following files:

For more information on ransomware protection, check out our page here.