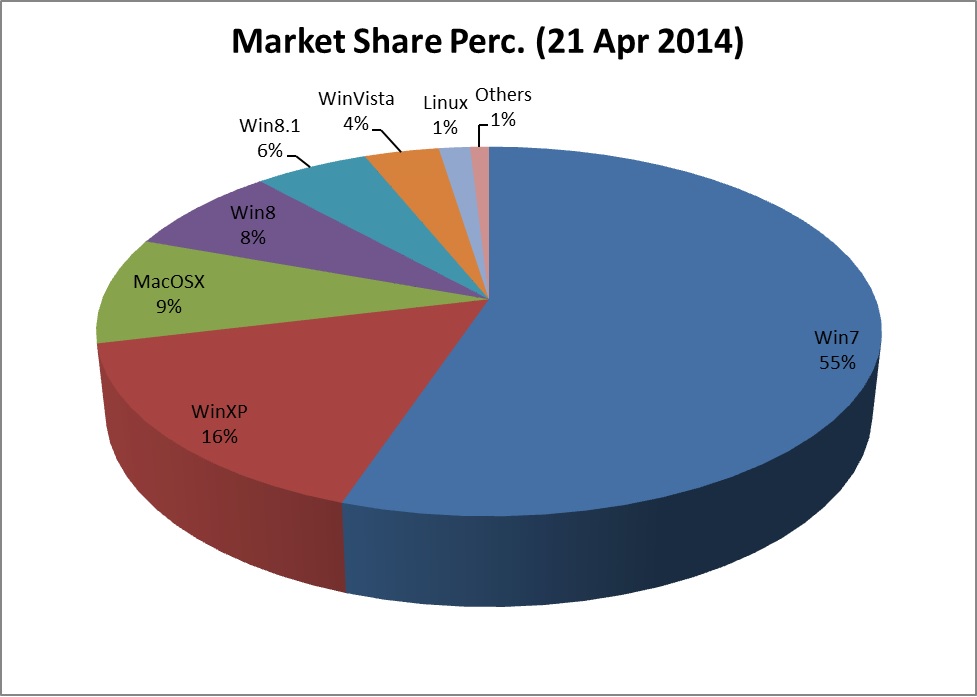 More than one month after Microsoft stopped supporting Windows XP, it is amazing to note that it is still the second most widely used operating system following Windows 7. Based on the data from StatCounter Global Stats it still accounts for approximately 16% market share amongst other desktop (i.e. PC and laptop) operating systems as illustrated in Figure 1.

Even with the collective efforts of Microsoft and several security vendors educating users on the potential threats of continued usage of the operating system, there are still a significant number of home users, small and medium businesses and corporate businesses that continue to use Windows XP for several reasons – although the graph below does show a decreasing percentage since the start of the year.

Reasons for Staying with Windows XP

I have read several postings on the internet about the reasons why there are still users who stick with Windows XP.  However, in the end, it comes down to value, time and education. I have summarized some of the reasons:

Financial institution and other Fortune 500 companies are still using Windows XP Embedded versions. There are still quite a high number of ATM machines, devices like scanners and other commercial hardware products that are still using Windows XP Embedded.  These companies have paid millions of dollars for extended Windows XP support.  It might be difficult for them to upgrade to newer operating system at once because it might cause disruption in the day to day business of the financial sector.  However, news has already spread that a group of hackers have already plotted an attack on ATM machines using mobile technology to control an ATM remotely. With this new method of attack, hackers can simply send SMS messages to a compromised ATM machine, take control of the ATM and do whatever the attacker wants – of course withdraw cash from the machine.

Several government-run facilities use Windows XP heavily. Funding in schools and libraries has been limited, and computer software upgrades are low priority. There were applicable laws that enabled schools and libraries to purchase computers at a cheaper price, but schools haven’t updated their hardware or the accompanying operating system since.  Many can’t support an OS newer than Windows XP and if they need to, it will likely require an upgrade of hardware as well, which significantly increases the costs.  Since students are very familiar with Windows XP it is likely possible that they are using the same in their homes as well.  This issue is also common in healthcare institutions.

Driver issues in old computer hardware and peripherals. Small offices and home users still keep their old hardware such as printers, scanners, copiers, internal storage devices and other hardware as long as these are still working and doing the job properly. Updating their operating system may pose issues as device drivers for old hardware are no longer updated past Windows XP (since new similar hardware has already emerged and is designed to work with the new operating system).  So changing the OS comes with hardware upgrades beyond the PC itself.

It is still working and it’s the only environment where old programs work. A majority of home users and small office workers have this kind of thinking – as long as things still function and can get their job done.  Also, there may be programs and software such as games which they would love to use or play  that were purchased prior to Windows XP and don’t run on operating systems past Windows XP.

If users still insist on sticking with WinXP because of one or many of the above reasons, then below are some survival tips from a security point of view to help users stay safe. Note that these tips will not ensure users are safe forever.

The above tips may help users survive attacks for the first few months or so but over time they still need to move to a new level of security, that is, to migrate to newer operating system with better security. Always remember the following potential risk of staying with Windows XP:

It maybe indeed be a challenge for so many to change their operating system and let go of Windows XP for a lot of reasons. The challenges basically equates to hassles, time and costs not to mention the additional adjustments on the part of the users. However, since security is compromised with the continued use of Windows XP, it is evident that the peace of mind of the users far outweighs the challenges of upgrading.