WannaCrypt Ransomware Spreads Like A Worm Via NSA Exploit

UPDATE (May 14): WannaCrypt/WannaCry is still being delivered through file sharing services over https at hxxps://transfer.sh and hxxps://down.xn--wda.fr/

The WannaCrypt ransomware (aka WannaCryptor, Wcrypt, and WannaCry) has managed to infect thousands of systems within just a few hours of its first appearance yesterday, with estimates on the order of 100,000 PC infections in 100 countries. There are reports of disruption at the likes of British National Health Service medical centers, German Railway ticket computers, FedEx and Telefonica, which apparently ordered employees to disconnect their computers from the corporate network in an attempt to stymie the spread of the ransomware. WannaCrypt encrypts files found on the system and initially demands ransom payment of $300 in Bitcoin to specific addresses, with the payment demand amount reportedly escalating over time.

Of particular note is how WannaCrypt is spreading. Unlike most ransomware, which is delivered via email, WannaCrypt has worm-like capabilities, and will infect any open remote desktop session (specifically using Microsoft’s Remote Desktop Protocol) on the infected machine using a known NSA exploit called “ETERNALBLUE,” which was leaked by the hacking group “The Shadow Brokers” on April 14. The “ETERNALBLUE” exploit is used to spread the WannaCrypt ransomware leveraging a Windows SMBv1 protocol vulnerability that was patched by Microsoft in March — but evidently many, many governmental institutions, businesses and individuals have yet to install the patch.

What Files are Encrypted

WannaCrypt will encrypt files with the following extension:

The new extension will be .WNCRY after a file has been encrypted, and WannaCrypt will leave a “Please_read_me.txt” file and “WanaDecryptor.exe” in every folder where files have been encrypted. 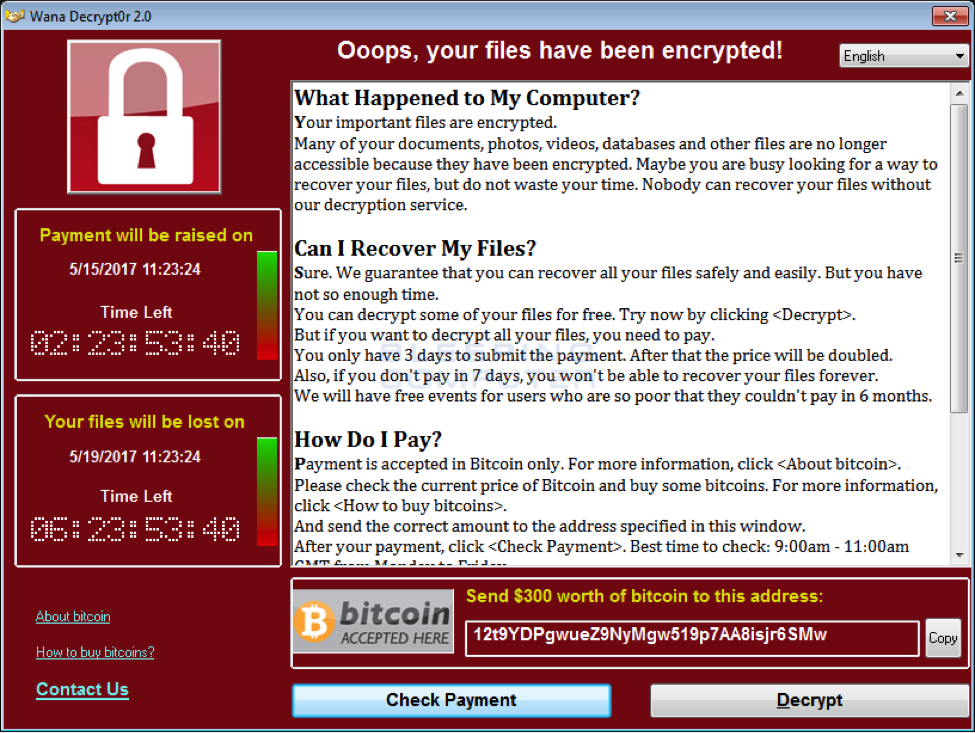 After encrypting all the files on the system machine, it will open up a program called “Wana Decrypt0r 2.0,” which displays instructions on how to pay the ransom fee and recover the files, and offers a helpful FAQ, displayed here. There are three different Bitcoin addresses provided for paying the ransom fee:

How to Protect Against WannaCrypt

Steps for preventing a WannaCrypt (and other ransomware) infections include:

Cyren detects WannaCrypt as the following, and stops many variants of the ransomware: