This month, the research team analyzed the data by industry to confirm our suspicion that certain types of companies are targeted more than others. Some of the findings were quite surprising, however, it is important to note that this data represents incidents that Cyren detected and remediated. The data might paint a different picture if we analyzed organizations that were compromised – an ounce of prevention is worth a pound of cure.

The ratio of phishing, business email compromise (BEC) and malware incidents varied by industry, but phishing remained the dominant threat. The continued prevalence of phishing supports the widely held theory that phishing is a precursor to more damaging attacks such as BEC and ransomware. Stop phishing and organizations dramatically reduce the risks of BEC and targeted ransomware. 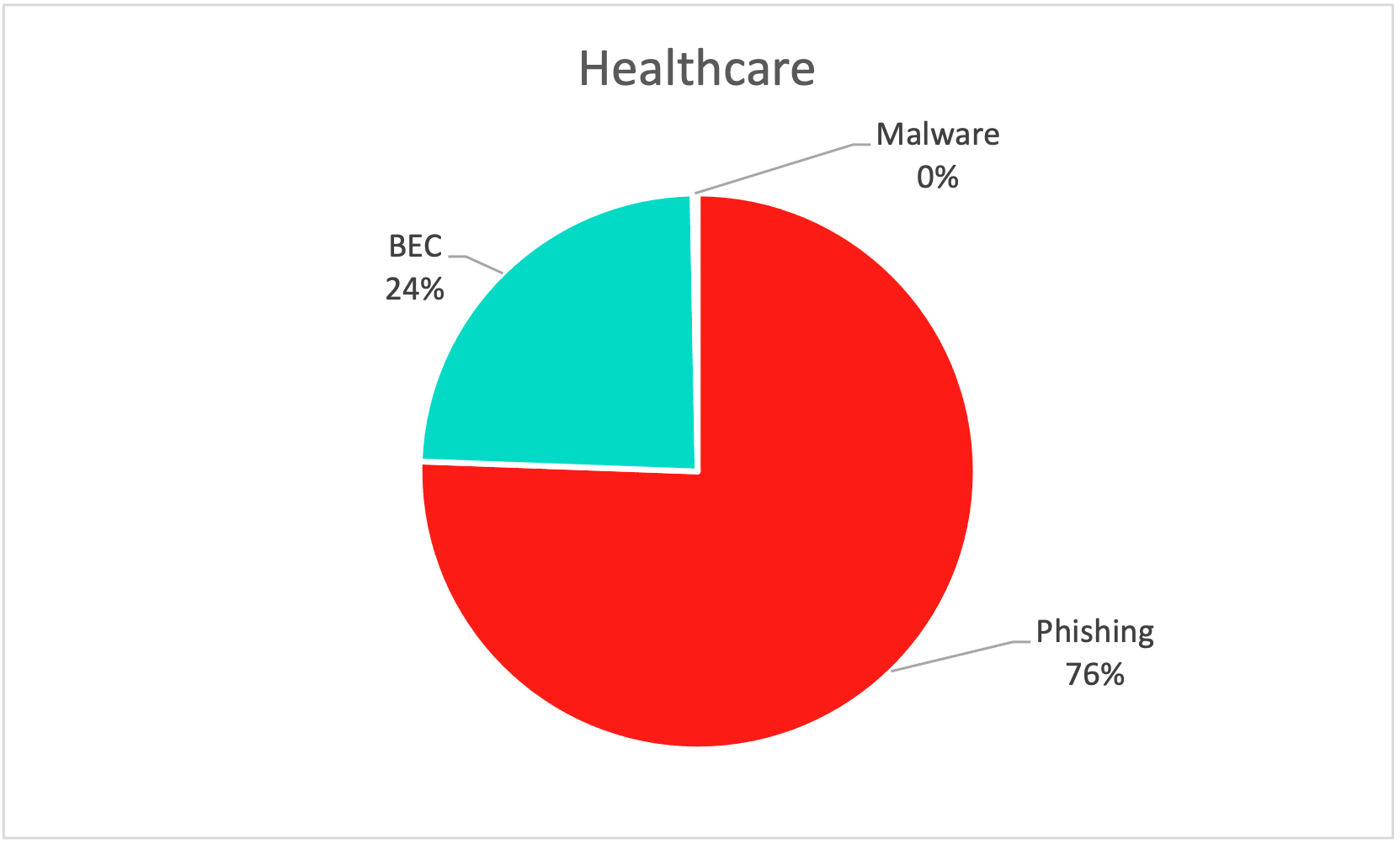 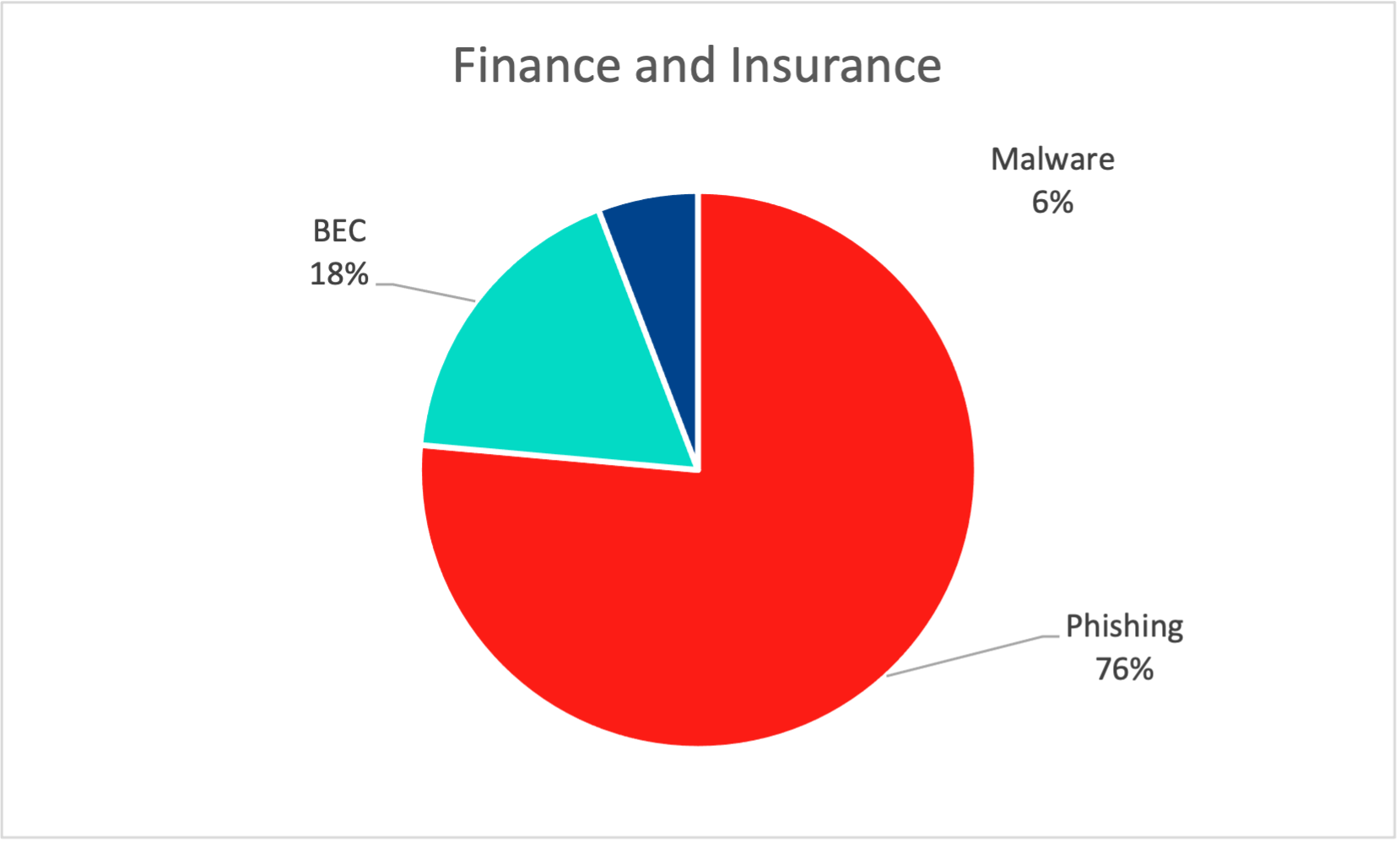 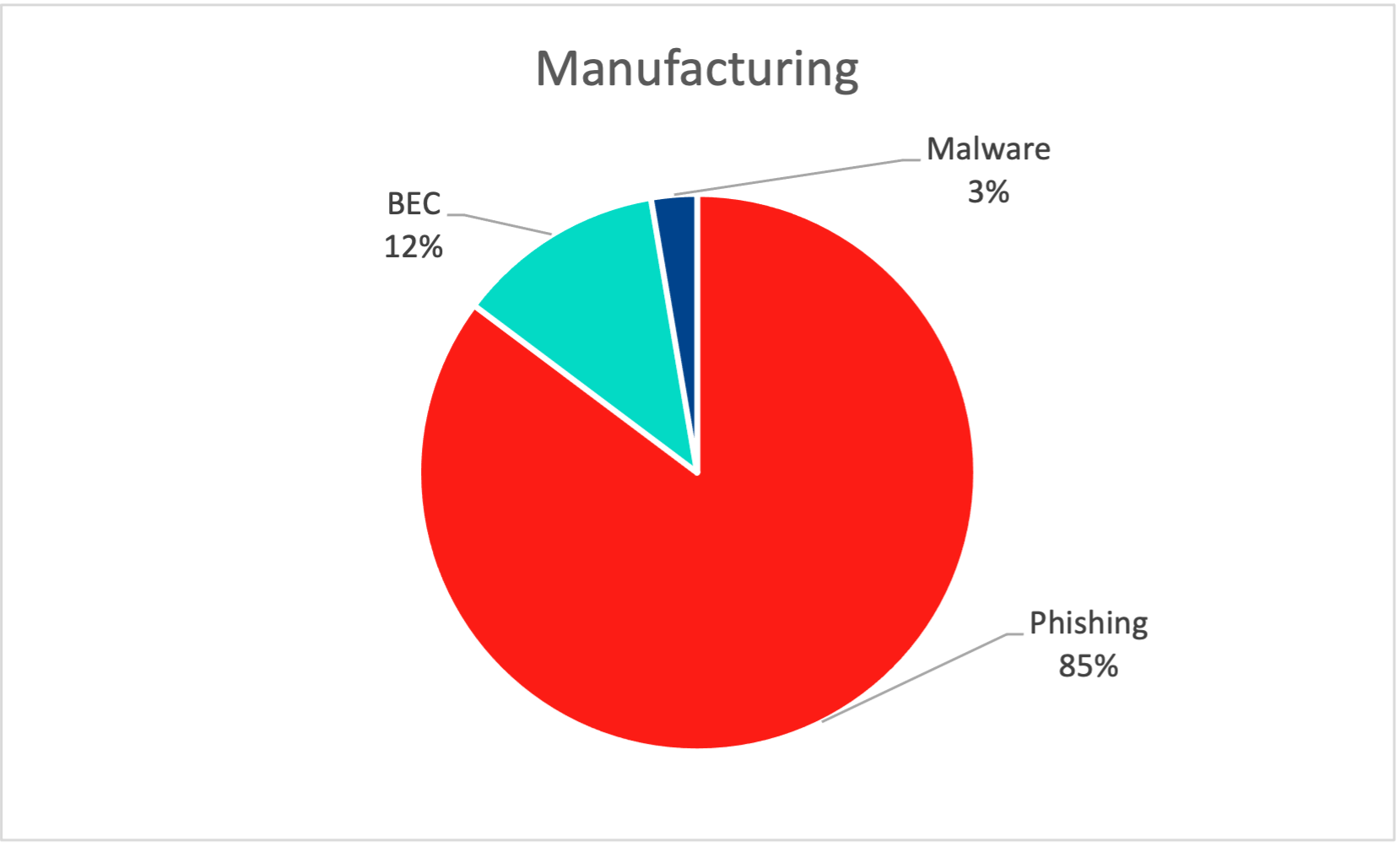 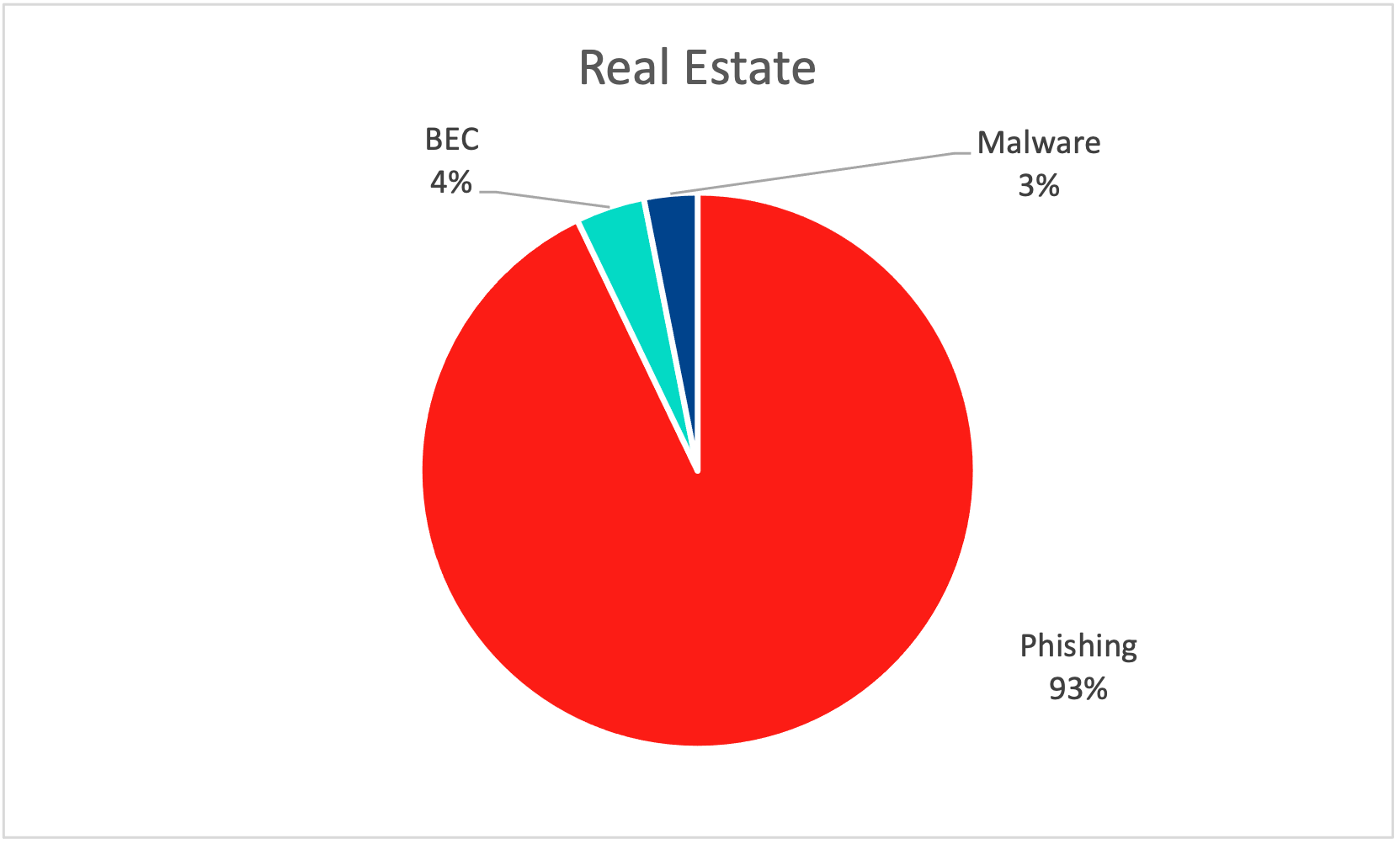 The ratio of threat types illustrates that different industries are targeted with a varying mix of tactics, differences among their business and motivations of cybercriminals. But what about the intensity of these threats? We can see that healthcare may face proportionally more BEC attacks, but which industries are attacked more often? 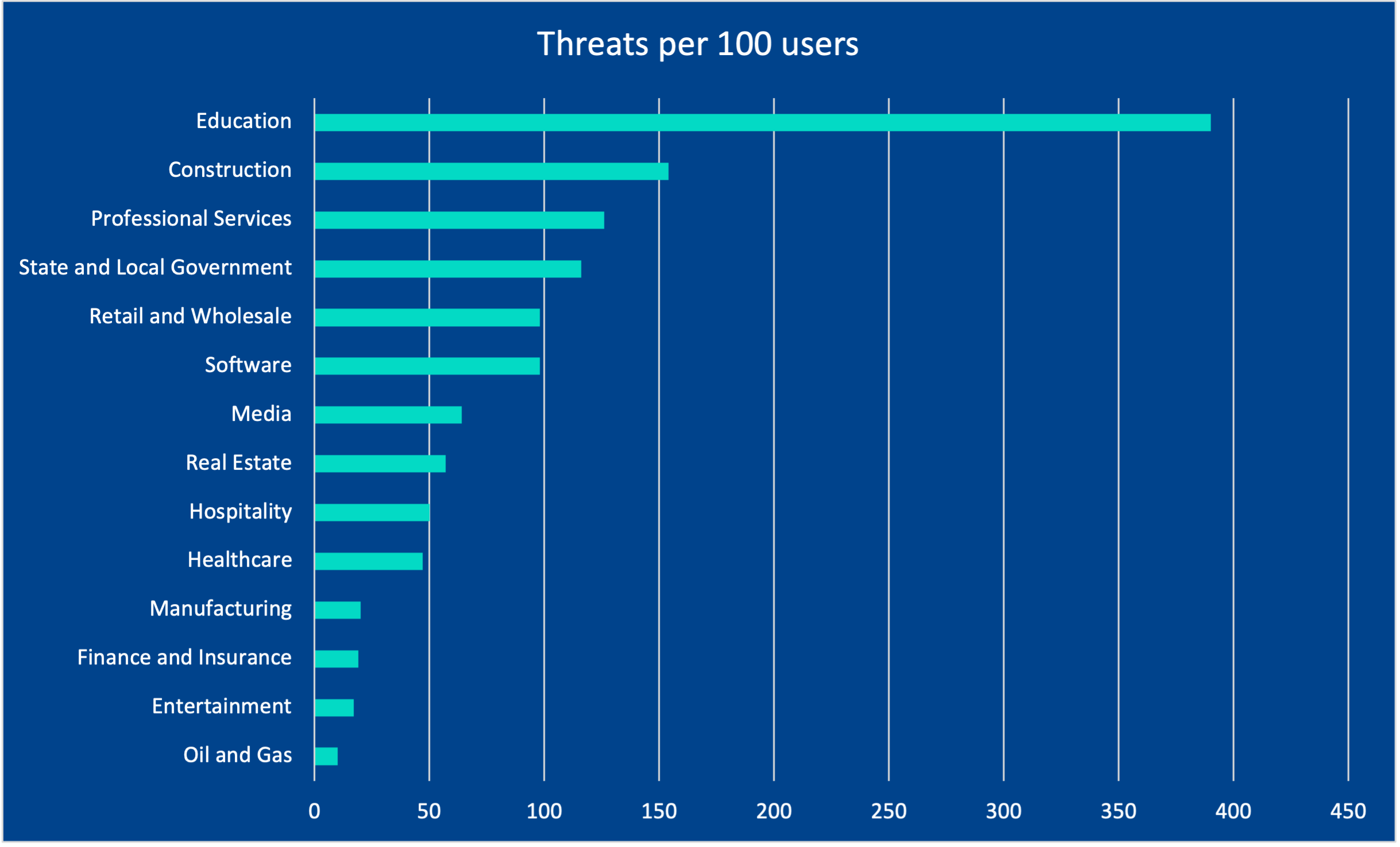 Phishing and BEC are forms of social engineering so it’s fair to think of employees’ mailboxes as the attack surface. The figures above show how the rate of malicious email incidents as a function of users – basically, how risk scales as the attack surface expands. We normalized the data to per 100 users to project the organization’s size.

Education is an outlier since the users include both staff and students. There was a surprising low rate for manufacturing, especially when compared to the construction industry which is closely related. We observed 20 confirmed threats per 100 users in the manufacturing vertical. Without solid detection and automated incident response, a manufacturer with 100 Office 365 users would spend at least 16 hours manually investigating and remediating emails.

Consider the new paradigm of asking IT to do more with less and the opportunity cost of losing two business days defending against email attacks. 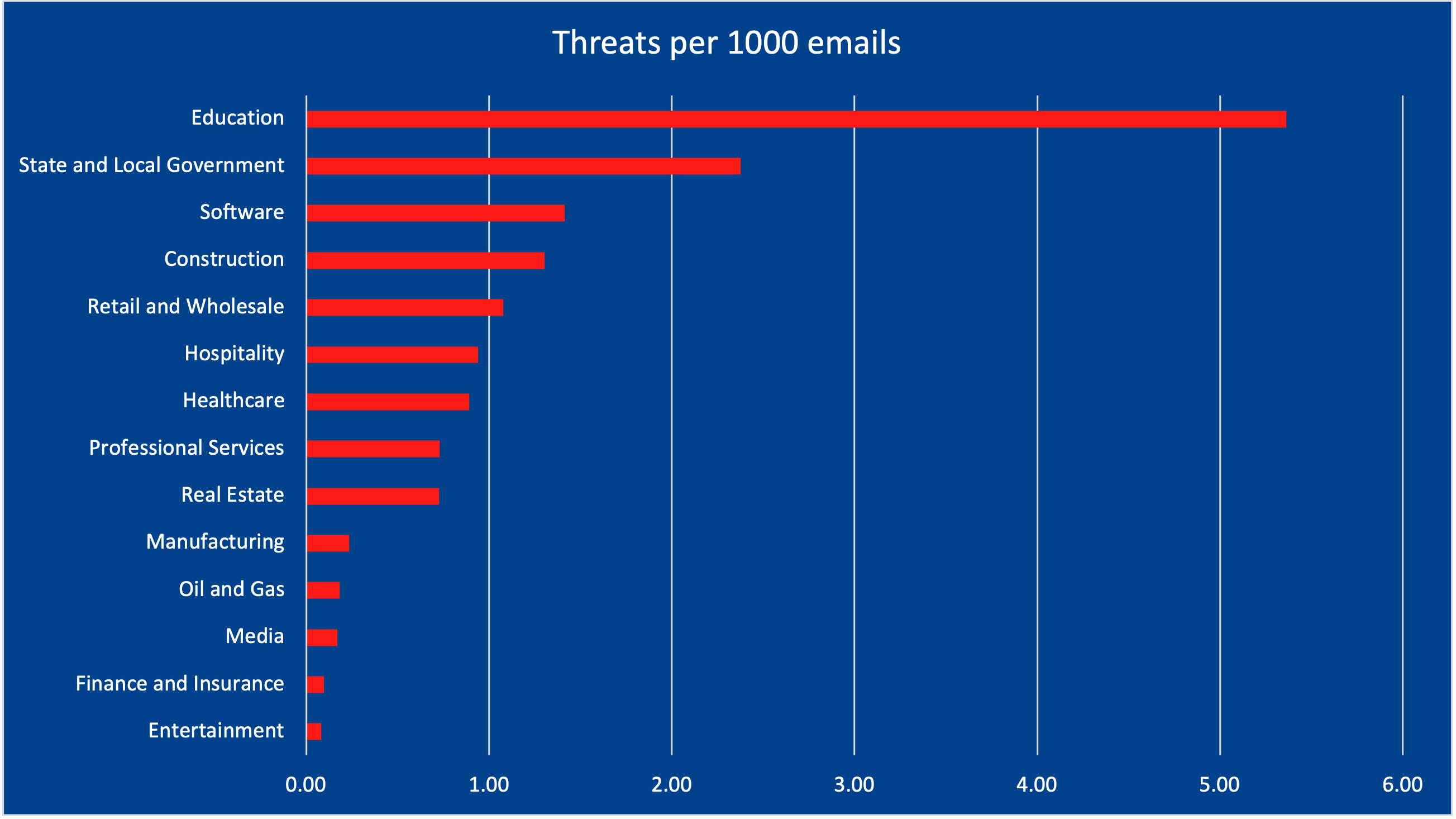 As part of the research, the team set out to understand how risks increase as a function of email traffic. If some percentage of all emails are malicious then the more emails an organization receives, the more incidents they have to detect and contain. Oil & gas, finance & insurance, and entertainment maintain their low ranks, but healthcare and hospitality move to the upper half.

Phishing, BEC, etc. are complex problems that don’t require a complex solution. User education is an important component, but several organizations have “over-rotated” on the idea that users are responsible for keeping sophisticated email threats at bay. The predominant trend is to use an email hygiene technology such as Microsoft Defender for Office 365 to catch 80% of threats, deploy a specialized add-on to catch and contain zero-day phishing and most BEC attempts, enable employees to perform initial analysis on the small percentage of emails that are classified as suspicious (rather than malicious or clean), and automate incident response workflows to save time and reduce exposure.

Email-delivered threats by any name (phishing, BEC, EAC, ransomware) are a top concern for any organization, regardless of industry. Just as the type and velocity of email threats varies across companies, so do the ability to defend against them and the impact if an attack slips through undetected. Heavily regulated industries like financial services have incentives to invest in robust cybersecurity measures, while other industries may under-invest. Regardless, every organization must have in place a mature (meaning automated and continually improved) process to detect and remediate targeted phishing attacks, BEC, etc. Preventing a successful phishing attack is one thing, preventing it efficiently is another matter.