Malware threats are known to continually grow in both their volume and complexity. Email-borne malware, especially that sent via Office 365, remains a large threat. The social engineering tactics convince recipients to open and unknowingly execute harmful attachments. Cyren Inbox Securityprovides enterprises the ultimate threat defense capability combined with risk-based analysis of suspicious attachments and automated incident response. Utilizing cloud-based pattern detection combined with multi-layer file scanning, this dual approach ensures malware detection from the “zero-hour” of an outbreak through any stage of the malware lifecycle.

Our patented cloud-based Recurrent Pattern Detection (RPD) technology can analyze billions of emails every day in order to detect malware outbreaks as they happen. Malware outbreaks distributed via email share identifiable patterns that include elements such as the sender’s IP addresses, combinations of characters in the subject or body, and the code in attached malware.

Why Use Cyren’s Email Security Engine?

Cyren’s Email Security Engine for Office 365 has many different benefits, which include:

How Does Cyren’s Email Security Engine Work for Antivirus Detection?

Email Security Engine can be integrated into vendor devices or service provider environments. From there, an email attachment query is sent by the Mail Transfer Agent (MTA) or security device to Cyren’s security engine. This results in a combined response from the detected pattern and scanned files.

This allows the requester to then delete malware attachments and emails – forwarding clean emails to their intended recipients. Integration options include comprehensive SDKs, daemons, and a range of plugins and filters. Cyren’s anti-malware engine is flexible and allows integration into the thinnest hardware platforms. It also allows for large-scale carrier-grade deployments. The same engine can be expanded to include additional services such as Anti-Spam or Malware Attack Detection. Our partners gain important technological, operational, and financial advantages by combining multiple security services into a single-engine and framework.

Read the data sheet and learn how to use Cyren’s Email Security Engine Anti-Virus with your Office 365 products, today. 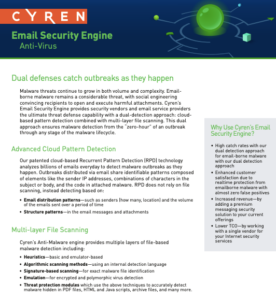