There has been much speculation in the Internet Security industry about the status of Locky – the ransomware heavyweight of February-May 2016 which suddenly ceased distribution at the start of June. As we previously reported Locky was distributed in vast email outbreaks, many times exceeding 10 billion emails/day and often with hundreds of thousands of variants. The current theories for the sudden drop:

In any event, Locky variants are once more being distributed as of June 22 – but with subtle “technological improvements”:

On June 22, 2016 GMT+8, we started receiving these invoice-themed emails which had zipped javascript attachments. Shown below are some sample emails which belonged to this campaign: 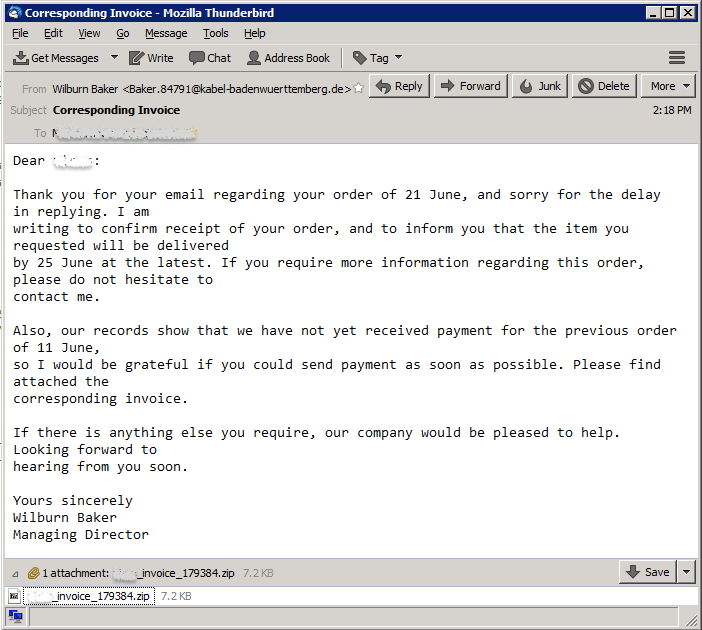 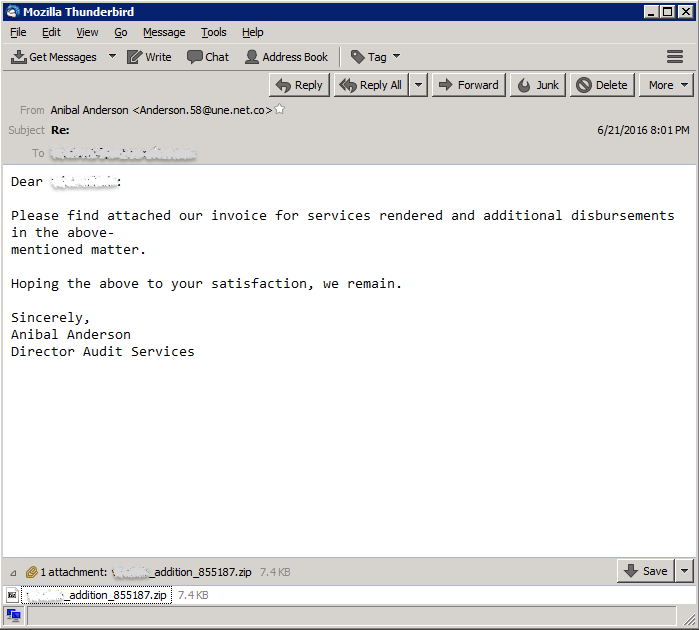 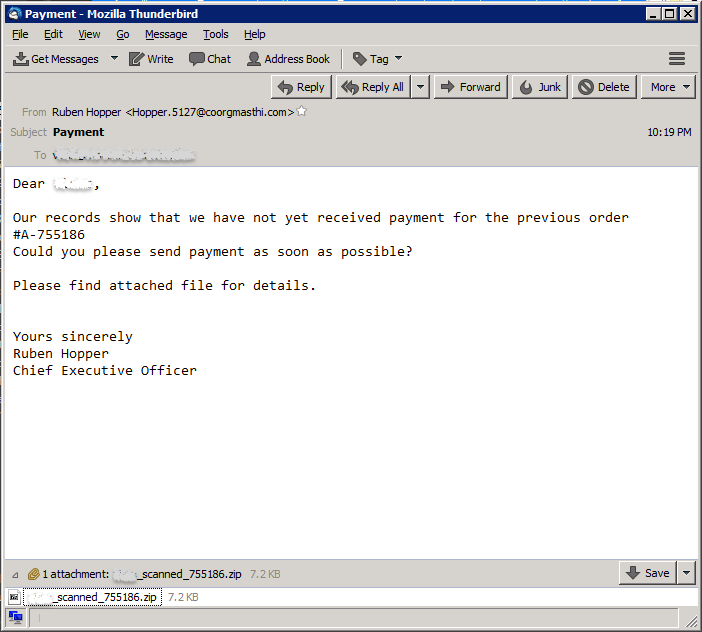 Extracting the javascript from the attached zip file, we find a structure similar to the Nemucod downloader scripts which were recently reported by ESET here: http://www.welivesecurity.com/2016/06/16/nemucod-ups-its-game/. Cyren detects these javascript malware as JS/Locky.AM!Eldorado and JS/Locky.AM1!Eldorado.

After clearing the first layer of obfuscation, it was indeed similar to the structure described in the report, and also employs the same method of download, which also used 3 layers of obfuscation. This obfuscation method obviously aims to prevent scanners from immediately blocking the malware payload which is downloaded and executed into the affected system.

After deobfuscating and saving the binary payload, the authors of this new wave of malware made sure that the binary payloads will only run properly when executed with a specific string argument, which in this case is “123”. This behavior presumably was added by the malware authors to prevent sandboxing systems from analyzing the binary payload if they were processed separately from the script.

After further analysis of the binary payload, which was found to be another custom packer which injects Locky malware code into another process. Cyren detects these variants as W32/Locky.GG and W32/Locky.GH.

Once injected and executed, Locky finds and encrypts files in the system, renaming the files with a unique identifier and adding the extension “.locky”. Similar to the earlier variants, it also drops HTML and PNG instructions on the user’s desktop and also a copy of the HTML instruction in folders where files have been encrypted. 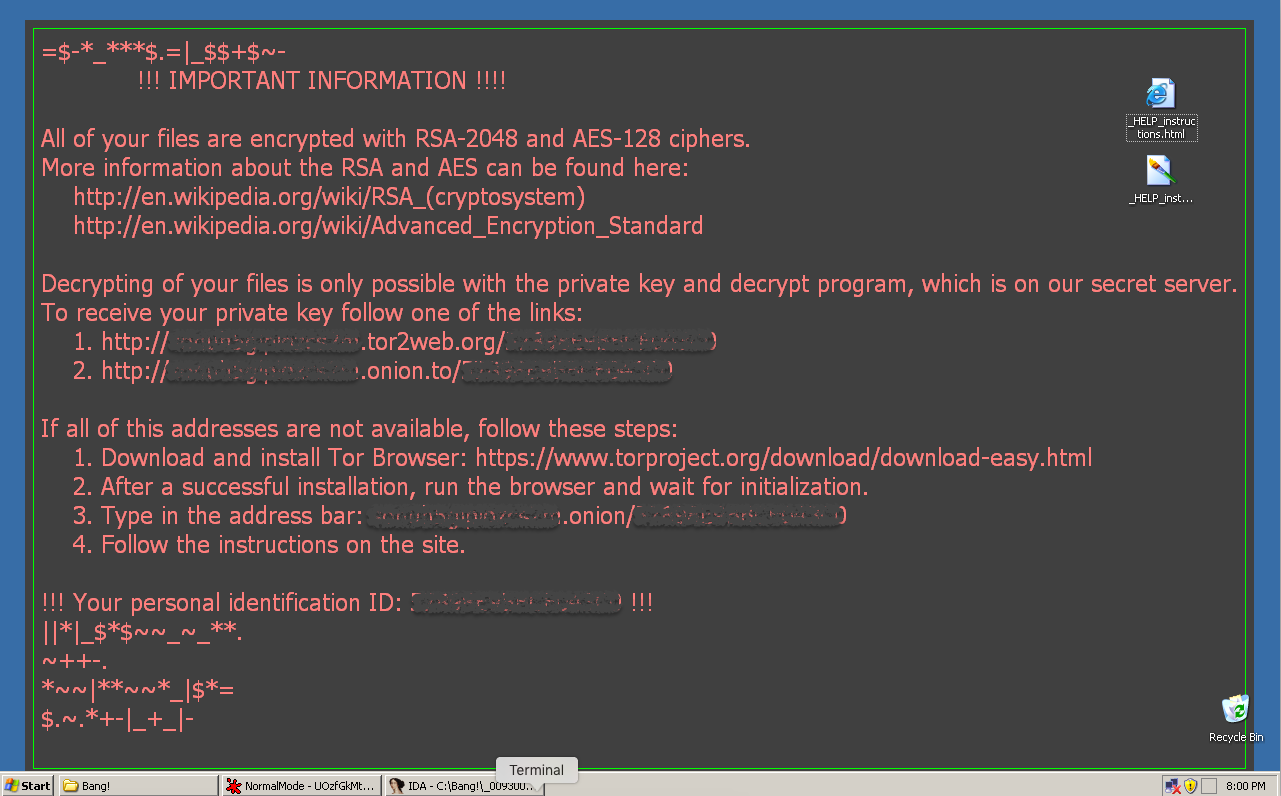 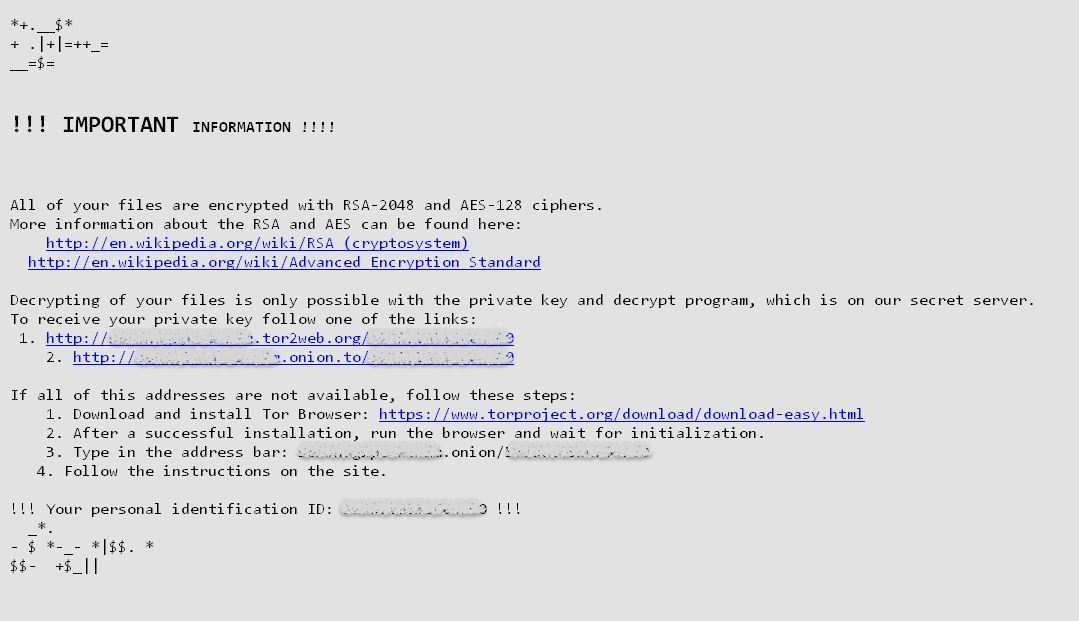 Clicking on the onion/torweb links redirects users to the ransom payment page, which instructs users to buy a decryptor for specific amount of Bitcoins – in this example 0.5 BTC – approximately $340.